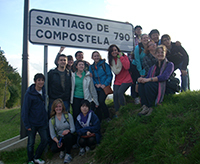 Fourteen Notre Dame students, along with two of their professors from the College of Arts and Letters, traveled to northern Spain over fall break to experience the Camino de Santiago—one of the most important Christian pilgrimages during medieval times.

History Professor Olivia Remie Constable, the director of the University’s Medieval Institute, and Danielle Joyner, an assistant professor of medieval art history, say it was an academic adventure they won’t soon forget. And their students agree.

“This is hands-on experience, constant discussion, going out into these churches, interpreting for yourself, and applying what you know about a structure to really bring everything together,” says Mairead Mumford, a senior majoring in medieval studies and Irish language and literature.

“You actually live out the course, instead of just reading about it.”

The trip, supported by a Teaching Beyond the Classroom grant from the College of Arts and Letters, was part of an interdisciplinary medieval studies course called The Art and History of the Road to Santiago de Compostela.

Learning in the Field 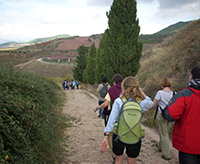 Junior studio art major Liam Cawley says the opportunity to actually travel along the pilgrimage route was intense but rewarding.

“I’ve taken lots of classes on things that I’ve never seen, and it’s interesting to learn about, but there’s an entire other realization when you go and see these things in the real world,” he says. “On the other side of that coin, I can imagine that going to Europe and seeing the same things, but not having that background, would really depreciate the experience.”

Before the trip, students prepared reports focused on specific sites along the route. Listening to the presentations while at each of the locations made the research come alive for the entire class, and was one of the highlights of the trip, Constable says. “So many of the things that we’ve studied suddenly make sense, now that we’ve seen them,” she says.

“Memorizing plans and looking at photographs of reliquaries can’t even come close to seeing the real thing,” agrees Mumford. “It’s not until you actually get in the churches that you just have that overpowering sensation. It’s an emotional experience.”

While much of the trip was beautiful, Mumford says, some of the most powerful moments came when they glimpsed the realities facing pilgrims traveling the same path in the Middle Ages. Whether walking into an unlit Romanesque church that was “overpoweringly gloomy,” or standing in cold, wet weather at the banks of a creek medieval travelers once forded, “you could really put yourself in a pilgrim’s shoes,” she says. 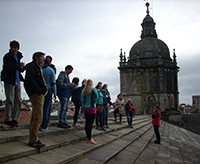 In creating the course, Joyner and Constable sought to help students develop the types of insights that only an interdisciplinary approach can bring about.

“It’s the opportunity to think about this phenomenon from these two complementary but two very distinct perspectives of history and art history,” Joyner says. “We wanted to demonstrate to undergraduates, who tend to be kind of discipline specific, how these complementary points of view can really enrich our understanding of medieval pilgrimage.”

Through an application process, the professors chose students from a range of majors including history, theology, art history, engineering, and studio art. “We wanted to make sure we got a real mix of people and interests,” Constable says.

This diversity has really enhanced the course, Joyner says. “Because they come from fairly different backgrounds, the students have very different points of view on the material, and that always makes for interesting discussions.”

Students have also incorporated their various academic interests into their semester-long research projects, which can include a creative element. “Because it is interdisciplinary, it’s not just 16 history papers,” Constable says. “It’s 16 all different kinds of papers, which is wonderfully refreshing.”

Cawley, for instance, is doing a series of six paintings illustrating one of the stories from the Cantigas de Santa Maria, a medieval Spanish codex telling the story of the miracles of Mary. “One thing that I’ve been considering with my project is the way that religion and religious art fits into contemporary art,” he says.

A Community of Scholars 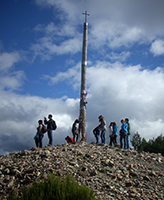 At the end of the course, students will present their final research projects to the class—an experience that Constable expects to be particularly meaningful. “They all have something really tangible they can hold onto in each other’s presentations, so they actually care about the subject in a way they didn’t before,” she says. “And I think they care about each other in a way they didn’t before.”

Both professors said taking the trip created a sense of community among the students. After traveling together for a week, the class became much closer.

“We weren’t just the teachers who have all the answers, we were really bonding as a group that was looking and thinking and working out what we were seeing,” Constable says. “The relationship is so much deeper than just professor and student. At the end of the semester, we won’t want to say goodbye to the class.”

Mumford says taking the course was one of the best decisions she has made at Notre Dame. “It was just a different style of learning, and it showed me what learning can be at its absolute best.”

For Joyner, one moment specifically summed up the impact the class had on all of them. After entering one of the churches along the Camino de Santiago, a student felt moved by the structure and its history, she recalls.

“The student said, ‘I’ve never fallen in love with a church before, but this one—this one I love.’” 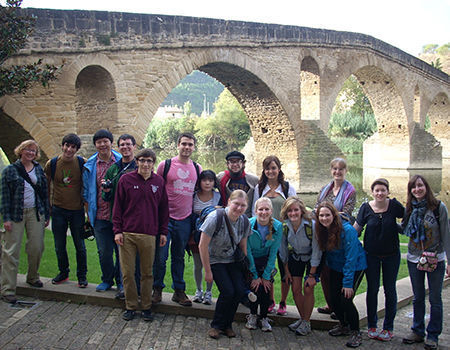