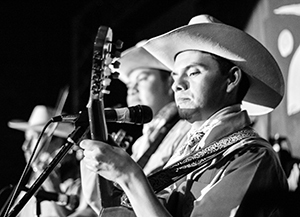 Furiously strumming his jarana into the early morning hours of a stranger’s backyard birthday party in Austin, Texas, Alex Chávez was having fun with the hired musicians who had brought him along as an impromptu guest.

He was also doing fieldwork.

Chávez, who joined Notre Dame’s Department of Anthropology in 2014 as an assistant professor, studies “the aesthetic dimensions of contemporary lived politics”— sometimes referred to as cultural poetics. He focuses on the unfolding of this expressive grammar among Latino migrant communities in the United States.

A faculty fellow in the Institute for Latino Studies, Chávez came to his research as a performer, trained in classical and jazz, but at an early age, he was also exposed to huapango arribeño, a style of Mexican folk music.

While in graduate school, he stumbled upon Mexican migrant musicians who brought him into their fold. These relationships became a central focus of his ongoing work.

Making music alongside huapango arribeño practitioners, he said, allows him to experience “the music and poetics with attention to their aesthetic design; thematic and propositional content; and pragmatic use as interactive modes of representation within the context of Mexican migrant life.”

As a teacher incorporating new media alongside tried-and-true pedagogical methods, Chávez brings this world into his classroom at Notre Dame.

He has used two Teaching Beyond the Classroom Grants from the College of Arts and Letters to host guest speakers, including award-winning poet Roger Reeves, hip-hop artist Olmeca, and Colectivo Altepee, a group from Veracruz, Mexico, that gave music and dance workshops, hosted a documentary film-screening, and hosted a fandango performance—a social gathering centered around music, dance, and poetry—at the Notre Dame Center for Arts and Culture.

“My efforts in the classroom are meant to reveal the heterogeneous nature of this community and its social and historical experiences with attention to migration, integration, politics, art, popular culture, and everyday practices of living,” Chávez said.

Such efforts, he said, also highlight the Latino community’s complexity and diversity, which in turn reveals the diversity in the nation as a whole.

“This realization is a vital step in shaping an anthropological frame of reference regarding Latinos in American society,” he said.

Last semester, Chávez taught a seminar called American Borderlands, which explored the shifting boundaries of American identity and belonging along the lines of race, class, and gender. He is currently teaching the anthropology course Musical Migrations: Greater Mexico and the Circum-Caribbean, as well as the gateway Latino Studies course Introduction to Latinos in American Society.

“The vibrancy of my students is a great source of energy, and through them, I gain access to surprising insights that have illuminating consequences for my own work,” Chávez said. “My most rewarding successes occur when I am able to return the favor by enlivening their understandings of cultural anthropology and Latino studies.” 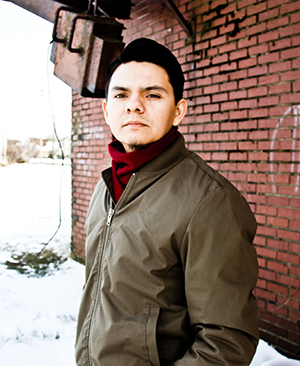 Outside the classroom, Chávez is producing a Smithsonian Folkways recording of huapango arribeño as part of the world-renowned Tradiciones music series, lending an anthropological perspective on the musical style for a broader audience.

He is also developing a research project that looks at recent Latino migration to the American South, he said, and the ways solidarity and intimacy forms “amidst the challenging pressures of transnational mobility and, thus, refiguring notions of family and home in daily life.”

A second, more local endeavor is focused on Latino communities in Chicago.

“I’m coupling the causes and mechanisms of displacement with the cultural and aesthetic expressions of place-making,” Chávez said. “Specifically, I’m exploring how sound—broadly conceived, from language to music—and the aurality of public space, or the neighborhood as a sonic sensorium, plays a role in creating place and, therefore, how the shifting sonic landscape of a place reveals the ways in which the flows of everyday life unfold according to their own logics alongside those of urban renewal.”

Chávez, who spent a year in a post-doctoral position at Notre Dame, views the university “as an esteemed intellectual space with high levels of engagement and research at the forefront of anthropology and Latino studies.”

“One of the most rewarding things is the opportunity to build relationships with faculty from various academic units and cross-campus institutions in ways that both strengthen the quality of intellectual life and brace the goal of academic excellence,” he said. “This is a great and supportive environment to be in.”