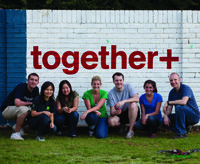 Together+, a campaign to combat xenophobia in South Africa by providing educational resources to empower people to embrace diversity, has been awarded a $50,000 Sappi Ideas that Matter grant.

After a year of research, development, refinement, and two trips to Johannesburg, the grant will enable the together+ team to produce and distribute the first round of materials designed by students from the graphic design program in the University of Notre Dame’s Department of Art, Art History, and Design.

The idea to develop a campaign to unite a South African community divided by xenophobia was born out of community-based research done by Notre Dame’s Center for Social Concerns (CSC) and its community partner, Kgosi Neighbourhood Foundation (KNF), based in a Johannesburg neighborhood greatly affected by xenophobic-fueled violence. The concept began to materialize in April 2011 when Paul Horn, KNF’s director of community outreach initiatives, approached Robert Sedlack ’89, associate professor of design at Notre Dame and owner of Sedlack Design Associates, and Andréa Pellegrino, founder of Pellegrino Collaborative, about the research need identified by the community.

“There was a critical need in the refugee community for some outside agency to try to address the problem of xenophobia, and I thought it would be a perfect fit for design and communication,” Horn says. “I knew both Andréa and Robert had a strong interest in and belief that design could effect positive change and be used for social good.”

Pellegrino adds, “I’m thrilled that Sappi’s Ideas that Matter jury saw potential in this project. With only a small fraction of socially responsible design projects ever getting past the concept phase, Paul Horn’s vision of pulling together a group of multi-disciplinary collaborators has been critical in moving together+ from concept to development to implementation.”

Although the South African Constitution provides broad protection to not only its citizens, but to all who live in the country, there is a significant gap between those ideals and enforcement at the municipal level. Research showed that refugees and migrants in this community do not receive governmental services, such as healthcare, education, and police protection, even though they have the right to such services. 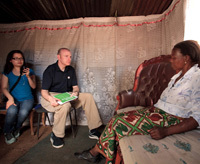 The campaign targets impoverished communities, where much of the “othering” of xenophobia occurs. One component of the together+ project targets young people in schools through a curriculum based story called Blooming Together. Further research in South African classrooms by Horn, Pellegrino, and Sedlack in October 2011 revealed that South African children have very negative perceptions of foreigners, but, when exposed to other perspectives, were open and able to accept them. Together+ chose to target young people because their worldview is impermanent.

Currently, the South African curriculum contains very little about the culture and social challenges in other African countries. Instead, a child’s view of other African people is shaped by popular sentiment. By integrating educational materials into an already developed network of schools, together+ can reach a large number of students and change their perceptions.

In addition to educating young South Africans, together+ will provide refugee populations with information about their rights within South Africa through a welcome guide and health care rights posters so they have the knowledge necessary to advocate for themselves.

Distribution partners include Médicines Sans Frontières (Doctors Without Borders), the African Center for Migration and Society at the University of the Witswatersrand, CoRMSA, Biblionef, and the Catholic Institute for Education in the Gauteng province.

Sedlack says the $50,000 grant will primarily be used to produce and distribute the project’s educational materials, but the sum only covers about a third of the funding needed to complete the entire project. The team’s fundraising efforts will now turn to expansion of the story and curriculum for older children, impact measurement tools, and scaling the campaign for additional South African communities, as well as refining it for other regions of the world affected by xenophobia.

Although there is still more work to do, the team paused to celebrate the Ideas that Matter award. “This grant takes the project from a theoretical level to practical implementation,” Horn says. “What’s really exciting is that because of the committed partners who are part of this program, this project has a major chance to influence thousands and thousands of school children and really make a difference in society. We’re very grateful to Sappi and the Ideas that Matter jury.”