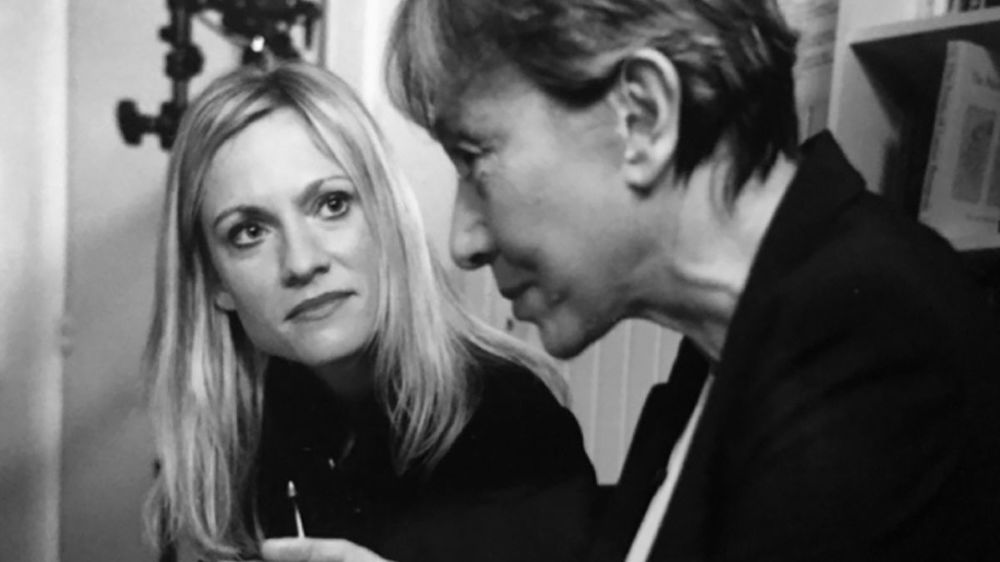 While living in Paris, frequenting its many bookstores and universities, Alison Rice realized a watershed moment was happening in contemporary French literature.

More than ever before, women from around the world were coming to Paris to write in French.

For nearly 15 years, the associate professor of French and Francophone studies has explored why these women were drawn to France and how they are transforming the Parisian literary landscape through innovative works of fiction.

“I’ve always been interested in the phenomenon of someone who can master the language well enough to write good works, or maybe even great works, of literature in French when it’s not their native tongue,” Rice said. “Suddenly, we have this moment where we have an unprecedented number of global women writers of French.”

With funding from the Institute for Scholarship in the Liberal Arts, Rice conducted 18 filmed interviews in Paris over eight years with authors originally from Iran, Korea, Senegal, and Bulgaria, among other countries.

She compiled, edited, and translated the interviews to create an online archive, francophonemetronomes.com, which is accessible to scholars and students worldwide.

“When you hear one voice after another, you can hear the commonalities and yet hear the different accents and inflections and the different ways of speech they employ,” she said. “It creates some powerful juxtapositions.”

Rice, who is now director of ISLA, is also completing a book project based on the interviews, Francophone Metronomes: Worldwide Women Writers in Paris.

The writers were often drawn to Paris because of its beauty and culture and because of a perception that it is “at the center of everything in France” — a reputation it has earned, Rice said.

“Paris remains a capital in every sense,” she said, “and it is a literary capital not just for France but for the Western world.”

Like any major city, however, Paris has its downsides, which Rice noted are sometimes tied to prejudice.

“France is, in many ways, a misogynistic country and a country of racial hierarchies,” she said. “These women have left their places of origin because they felt excluded for various reasons, and then they don’t always feel truly accepted in France either.”

Rice sought to highlight the women’s common experiences through her website and book project, by interweaving their voices in chapters focused on themes like immigration and identity.

“These women are all of different generations and, of course, very different backgrounds, so it has been fascinating to see how they are all drawn to the French capital and what they say about their experiences as a foreigner there,” said Rice, who is also a concurrent faculty member in the Gender Studies Program.

“Through very different types of writing, so many things seem to come together and so many common themes emerge in their work.”

“These women are all of different generations and, of course, very different backgrounds, so it has been fascinating to see how they are all drawn to the French capital and what they say about their experiences as a foreigner there. Through very different types of writing, so many things seem to come together and so many common themes emerge in their work.”

Rice, a fellow at the Kroc Institute for International Peace Studies and the Nanovic Institute for European Studies, brings her research to her students by exploring the authors’ works and sharing her filmed interviews in her classes.

With funding from the Nanovic Institute and Teaching Beyond the Classroom grants, she has also brought several of the authors to campus to meet with students.

“That is one of the joys of studying contemporary writers,” she said. “We all benefit so much from having the opportunity to listen to and interact with these figures who have risked so much to make a career of writing. I am touched and inspired by the stories they tell.”

Because they were raised outside of France, the women bring a valuable perspective on the issues facing the country today, Rice said.

“They’re much more attuned to what is quirky about French culture, what’s unusual,” she said. “They’re really well-positioned to say, ‘Here’s how things are evolving, and here’s what might be wrong with this society.’ Those are the voices we should be attentive to.”

A sense of mission

As she wraps up Francophone Metronomes, she is already at work on her next project on Francophone peace studies — a field that has yet to be fully explored, she said.

She is in the process of filming interviews with women activists and writers for the project, which will include a book and a documentary film.

Notre Dame has been an incredibly supportive environment in which to teach and research, said Rice, who joined the faculty in 2005.

“It is wonderful to be a scholar at Notre Dame. There is a commitment here to making the world a better place,” she said. “And this is precisely the place to be doing this kind of research — where we have the values and sense of mission to care for the human on a profound level.”

“This is precisely the place to be doing this kind of research — where we have the values and sense of mission to care for the human on a profound level.”