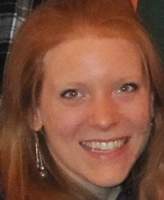 The first part of her project provides written interpretations of the legends for English-speaking students. Atwood comments further on the stories with a series of original oil paintings intended to communicate visually—and more universally than language can—to both Quechua and English-speaking audiences. Someday, Atwood hopes to transform the work into a children’s book suitable for readers from both cultures.

“The project allowed me to wear a lot of hats,” Atwood says. “It involved painting, linguistics, anthropological research, photography, and informal interviews.

“For me, it was a lovely culmination of my Arts and Letters degree.”

Falling in Love With a Culture

In the spring of 2010, Atwood began two semesters of Quechua language study in the College of Arts and Letters’ Department of Romance Languages and Literatures under the direction of Inés Callalli Villafuerte and Gina Maldonado, both visiting assistant professional specialists.

“I did it really just for fun, but they taught me to fall in love with the language,” Atwood says. “They’re both Peruvian, and our studies became sort of a Quechua version of Dead Poets Society.”

With her interest piqued, Atwood signed up for more Quechua study in summer 2011 at the Centro Tinku language school in Cusco. There, the seeds of her senior thesis took root.

After classes at the language school, Atwood would head down to the market and conduct interviews with Quechua-speaking residents about their cultural legends.

“No, I don’t think I know any stories” was the standard first reply to her queries, Atwood says, but slowly, she earned their trust and they began sharing their traditional tales.

Atwood’s project was made possible, she says, with financial assistance from the Kellogg Institute for International Studies, the Undergraduate Research Opportunity Program in the College’s Institute for Scholarship in the Liberal Arts, and the Glynn Family Honors Program, a rigorous course of study blending the humanities and sciences.

Available to some of the most promising scholars of each incoming class at Notre Dame, the Glynn program provides opportunities to work one-on-one with some of the University’s best scholar-teachers and guarantees students at least one summer’s funding to conduct original research.

“Mary is a writer gifted with extraordinary powers of expression,” says her advisor Sabine G. MacCormack, Rev. Theodore Hesburgh C.S.C. Professor of Arts and Letters, and a faculty member of the College’s Departments of Classics and History as well as the Kellogg Institute.

“With inimitable simplicity and grace, she shares experiences with her readers and thereby scatters abroad the seeds of what it is to be human,” MacCormack says. “She invites participation in a generous and beautiful way of being in the world.”

Like the celebrated Inca Trail that leads to Machu Picchu, Atwood’s path to Cusco had challenging twists and turns. A lover of languages since her high school Spanish classes and previous study abroad in Spain, the native of Woodstock, Conn., had planned a Japanese major around a junior year semester abroad in Nagoya, Japan.

Then, in late 2010, she was diagnosed with thyroid cancer. Surgery restored Atwood to health, but discussions with her advisors and parents led to a decision that traveling so far from home so soon after her treatment might not be prudent.

Atwood, who also has a keen interest in theology, looked at her credits and realized she was halfway to completing a major in that discipline. She finished her major in theology in a year and a half—and “absolutely loved it,” she says.

Atwood’s transcripts will also reflect her minor in peace studies, and she’s just one literature course short of a second minor in Japanese. 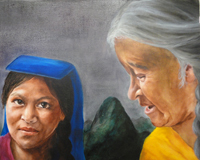 Studying such a wide variety of disciplines has revealed surprising connections, Atwood says. Many words are traded between Spanish and Quechua speakers, she notes. Atwood has also discovered similarities between Quechua and Japanese.

“They’re syntactically similar, and there’s an incredibly strong linguistic link, which led to all sorts of comic mishaps whenever I unwittingly substituted a Quechua word for a Japanese one in class,” she says.

Over the past two years, under the tutelage of Assistant Painting Professor Jason Lahr and of Michael P. Grace Professor of Painting Maria Tomasula, Atwood also learned how to paint.

“He helped me look at the painting more critically and to ask if it’s saying to the audience what I’m hoping it says, and she provided technical assistance and helped me breathe life into the paintings.”

This summer, Atwood plans to continue refining paintings she created for her senior thesis. For the fall, she has secured a paid internship at Notre Dame working as a liaison between the Office of Campus Ministry and the residence hall choirs.

“I’ll also work with Notre Dame Folk Choir members as a spiritual mentor,” Atwood says, noting that she is considering ministry after that or possibly entering graduate school in theology, peace studies, or anthropology.

No matter what she decides, Atwood says the connections and personal friendships she forged at the Cusco market will linger.

In a passage from her senior thesis, she recalls a conversation that occurred during her research there.

“’Why do you laugh?’ Atwood asks an interviewee. ‘My Quechua isn’t that bad!’

“My listener grabbed my hands and started patting them, saying, ‘No, no, my sister, I laugh because I cannot believe a gringa is speaking to me in Quechua. I laugh because I am happy, because I never thought someone from your country would want to learn our language. A North American wants to learn my language. That makes me proud, and for that I laugh.’”