Notre Dame psychologist Darcia Narvaez has received the 2015 William James Book Award from the American Psychological Association for her latest book, Neurobiology and the Development of Human Morality: Evolution, Culture and Wisdom.

The award recognizes a recent book that attempts to bring together diverse subfields of psychology and related disciplines and demonstrates an essential underlying set of themes that serve to unify or integrate the field.

The scope and breadth of Narvaez’s book “rendered it an excellent choice for the award,” the award committee noted. “It exemplifies the best of a general and integrative approach to psychology.”

Narvaez, a professor of psychology in the College of Arts and Letters, accepted the award on August 8 at the APA convention in Toronto. 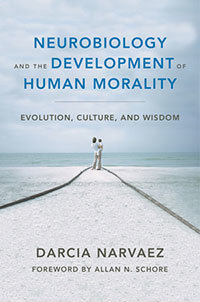 Neurobiology and the Development of Human Morality

Her book, she said, integrates elements of anthropology, clinical and developmental psychology, and neuroscience to examine the influences in early childhood that help shape a person’s moral character.

“It gives a big-picture view of different ways humans can develop in childhood and create cultures as adults that match their early experiences,” Narvaez said. “Our research in the lab is about the evolved developmental niche—the early nest for humans—whose primary characteristics emerged with social mammals more than 30 million years ago.”

The team includes Narvaez, Lijuan “Peggy” Wang and Ying “Alison” Cheng, both associate professors of psychology; Jennifer Burke Lefever, an assistant professor of psychology; and a colleague from Wellesley College.

The erosion of that child-rearing approach, she said, has led in part to higher rates of anxiety and depression and a morality that is more self-protective in children and adults.

“It is only in the last 1 percent of human history that we’ve strayed from these parenting practices and created cultures of competitive detachment instead of cooperative companionship,” she said. “The book describes how that happens and suggests ways to get back to living sustainably and peacefully, which is really our human nature.”

Narvaez, who joined the Department of Psychology in 2000, has published numerous books and articles on moral cognition, moral development, and moral character. She is a co-director of the interdisciplinary Self, Motivation, and Virtue project and the Developing Virtues in the Practice of Science initiative. She is executive editor of the Journal of Moral Education and writes the popular Moral Landscapes blog for Psychology Today.

Darcia Narvaez discusses her book in this interview with Notre Dame’s Institute for Educational Initiatives.