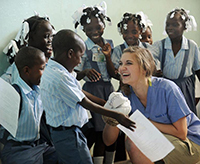 Rwanda is one of the few countries to have met the United Nations’ Millennium Development Goals—which include reducing childhood mortality, improving maternal health, and combatting HIV/AIDS, malaria, and other diseases. In her research, Notre Dame senior Catherine Cichon explores how Rwanda’s success may be repeated in other developing countries.

Cichon, an anthropology and Arts and Letters Pre-Health major, first became interested in traveling to Rwanda after a January 2013 trip to Haiti with the volunteer organization Health for Haiti.

“It was that trip that first inspired me to look into global health and the potential of medical partnerships,” Cichon says. “Rwanda and Haiti are similar in demographics and size, and, very recently, they were both considered failed states. In the last decade, however, Rwanda has been very successful in reaching goals in health care standards and education.

“I wanted to see what Rwanda has done well that Haiti could learn from.” 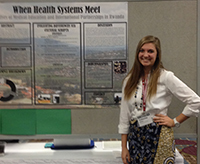 During an eight-week research trip to Kigali, Rwanda, Cichon completed extensive interviews with a dozen physicians and other medical professionals for a senior thesis titled, “When Health Systems Meet: Narratives of International Partnerships and Medical Education in Rwanda.” She presented her findings at the 2013 American Anthropological Association meeting in November.

“I compared the ‘cultural scripts’ of medical professionals from both Rwanda and the United States working in Kigali,” she says. “I was interested in learning about their motivations for entering medicine, their understandings of Western biomedicine, and how they overcome their differences while working together.”

Developing strong international medical partnerships has been key to improving Rwanda’s medical education system and helping the country meet the UN development goals, Cichon says. Based on those successes, Rwandan physicians are now creating their own programs to travel to less developed countries, like Ethiopia, and improve health care there.

Cichon’s trip to Africa was supported by grants from the Center for Undergraduate Scholarly Engagement and the Undergraduate Research Opportunities Program in the College of Arts and Letters’ Institute for Scholarship in the Liberal Arts.

The opportunity to conduct the interviews in person, observe the medical partnerships at work, and experience the culture for herself was critical, Cichon says. “It brought a new perspective to what I had learned from the literature,” she says. “To be able to draw on that first-hand, tangible research for my thesis and that pride of having done this myself has been incredible.” 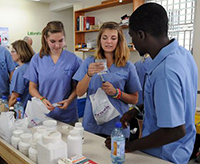 Looking ahead, Cichon plans to become a physician and also earn a master’s degree in public health. She says that her anthropology and Arts and Letters Pre-Health majors have prepared her well for medical school.

“I really enjoy having both majors,” she says. “I get the basic science coursework I need—I love learning biology and chemistry with pre-health—and my anthropology major puts that science into perspective and looks at how it affects people, how to work more toward preventative medicine, and factor in the social determinants and cultures.

“I think it provides a much more well-rounded background and a great foundation for starting to study medicine.”

Cichon, who began learning Creole this year at Notre Dame, says she would like to go back to Haiti someday, through a program like Doctors Without Borders or Partners in Health.

“I see that as continuing to bring my anthropology education into medicine,” she says. “I’d love to return now that I’ve taken Creole and hopefully continue to work on some type of public health initiative as a physician.”