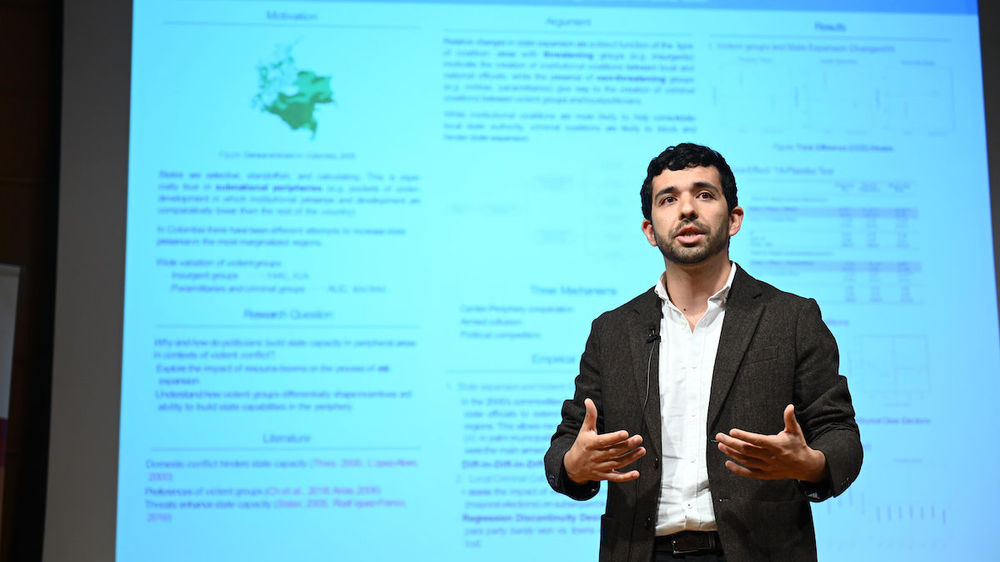 What does palm oil — cheap, easy to produce, and endlessly versatile — explain about state-building in a region wracked by violence?

Plenty, according to Ph.D. candidate Camilo Nieto-Matiz, a comparative political scientist who studies how states increase their capacity in subnational peripheries, poor areas with little state presence, in times of conflict. In other words, he examines how governments undertake fundamental tasks like providing security, collecting taxes, and building schools and roads ­— all of which are necessary for development, democracy, and political order.

Nieto-Matiz, a dissertation year fellow in the Kellogg Institute for International Studies, focuses his research on his native Colombia. Among the topics he examines in his dissertation is how the country responded to an international spike in the price of palm oil, which is used in everything from processed foods to biofuel and packaged products like cosmetics, in the 2000s. The price shock spurred Colombia to dramatically increase its production of the oil palm crop, even in remote areas controlled by guerillas and paramilitaries.

By tracking changes in state expansion in those areas, Nieto-Matiz has been able to shed light on why the government of Colombia, a nation wracked by decades of civil war, engaged in state development projects in some outlying regions but not others.

His dissertation also addresses how, even in a democracy with elected officials who are accountable to the public, the presence of violent groups can impede the development of a more capable state at the local level. That’s because violent groups don’t operate in a vacuum and may establish networks of relationships with elected officials, according to Nieto-Matiz, who studied the connections between mayors, violent actors, and their impact on governance structures in Colombia.

While most social science research on state capacity focuses on developed regions, Nieto-Matiz’ dissertation research is unique because it focuses on peripheral areas. His key finding is that different types of violent groups — threatening and nonthreatening — have different impacts on the type of state expansion.

According to Nieto-Matiz, threatening actors such as insurgents challenge the state and use weaponry to subvert political order and engage in their own state-building. Nonthreatening groups including paramilitaries, pro-state militias, and death squads may resort to violence, but generally don’t threaten the state and may even partner with the government to combat an insurgency.

Nieto, who will be a postdoctoral fellow at the Center for Inter-American Policy and Research at Tulane University next year, compares virtually identical municipalities in Colombia to determine how the rise of politicians linked to threatening and non-threatening groups affected state expansion. Read more about his research and findings below.

You're from Colombia. How did your experiences there trigger your interest in state-building in subnational peripheries? Did you learn anything through your research, which included months of fieldwork in Colombia, that surprised you about your home country?

With several civil wars in the 19th and 20th century, it would be fair to say that numerous generations of Colombians have not experienced a peaceful country for decades. Since the 1950s, violence by the government, guerrillas, paramilitaries, and drug trafficking organizations has left millions of internally displaced people, hundreds of thousands of deaths, and thousands of disappearances. And yet I never personally experienced any of it. Having been born and raised in Bogota gave me a tremendous advantage in having access to public goods, education, and a comparatively capable state, which dramatically contrasts with the poorer, underdeveloped, and often violent Colombian countryside. These notorious differences in levels of development within a same country have always fascinated me. In some of my research, I use both quantitative and qualitative methods to understand the causes of weak states and their consequences for development and violent conflict.

In one of my dissertation chapters, I study how the increase in the international price of oil palm incentivized political elites in Colombia to increase state capabilities in areas where palm was a suitable crop. Interestingly, due to specific geographic and climatic constraints, these areas have been poor and underdeveloped relative to the rest of the country. This allows me to isolate the effect of an exogenous “palm shock” on changes in taxation, public goods provision, and violence in these areas. Apart from the methodological advantages of using this strategy, the oil palm boom nicely illustrates how a commodity shock quickly turned a previously marginalized region into a strategic area for state officials, agribusiness, and violent actors. And yet this new commodity failed to deliver economic development and prosperity in a sustained and homogenous way. Instead, especially in areas where paramilitaries were a prominent actor, the palm boom gave way to important waves of forced displacement, massacres, and land grabbing.

One of the key contributions my dissertation seeks to make is to theorize and empirically test how violent groups differentially impact order, development, and state capacity outcomes. This stands in contrast with an important part of the literature which has been agnostic about the type of violent group by claiming that internal conflicts negatively affect state capacity. While it is true that civil strife has a damaging effect on countries, I argue in my work that not all groups exert the same effect on state capacity: areas with the presence of threatening violent groups – such as rebels – are more likely to experience higher relative changes in state capacity. Violent threats prompt state officials to increase state presence in the periphery and facilitates the cooperation between national and local politicians. In contrast, state capacity will be more difficult to attain in the presence of non-threatening groups (such as paramilitaries, militias, etc.) that do not pose a major threat to state authority. Not only do non-threatening groups discourage greater intervention from the central state, but they are also likely to capture the local state by establishing alliances with local politicians and local elites.

You're extending your initial findings to explore the role that political parties and local elites may play in brokering state presence in conflict zones. What have you found so far?

In my dissertation, I’m also interested in understanding how local politicians, especially mayors, may impact state capacity. I focus on mayors – key actors in their municipalities – because they have privileged access to resources, information, and coercion, so any decision they make can either affect or boost political order. Of course, violent groups are aware of mayors’ relevance, so it is sometimes in their interest to establish arrangements with these elected officials. My analyses suggest that even when the establishment of alliances between local politicians and violent actors may serve immediate purposes, such as winning an election, these ties can have lasting consequences on the state's ability to consolidate authority. More concretely, I find that electing a paramilitary-friendly party in Colombia increased homicides rates and decreased the extraction of property taxes and these effects persist over time.

Your dissertation focuses on Colombia. What implications do your findings there have for other countries or regions?

While my dissertation focuses on Colombia (a case which, in many respects, is different from its other Latin American counterparts), it offers several implications for understanding local state capacity in developing countries where the state is confronted with the decision to tackle organized violent actors. My dissertation helps understand how commodity booms incentivize political elites to invest in state capacity in rural peripheries and how the ultimate outcome depends on violent actors. Similar processes have happened in Guatemala where oil palm has become an important commodity and where drug organizations have acquired massive portions of land. My dissertation also studies how the election of mayors with ties to paramilitaries and criminal actors has deleterious consequences for state capacity. Of course, this is not particular to Colombia, but it is also present in other countries, such as Brazil and Mexico, where criminal structures of varying complexity engage in relationships with elected officials and impact local governance.

How has the Kellogg Institute helped move your research forward?

Kellogg has been a constant source of support throughout my doctoral studies. I’ve been very privileged to be part of the Institute as a student interested in Latin American politics. Thanks to its tradition in the field, I’ve been constantly exposed to an intellectually stimulating environment and conversations with faculty, visiting fellows, and other graduate students that have helped me advance both my dissertation and other research projects. What I most value about Kellogg is its strong sense of scholarly community: all the different workshops, works-in-progress, and other academic events have allowed me to make valuable connections with fellow graduate students and faculty and have helped me form and develop my research.