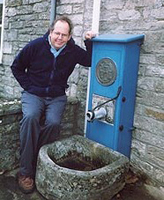 Notre Dame Professor of History Christopher Hamlin has been invited to study at the Institute for Advanced Study (IAS) in Princeton, N.J., for the 2013-14 academic year. While at the IAS, he plans to continue his research on the intersection of public health and economic policy in 19th century Ireland and Scotland.

“I am excited to be able to work in the company of other modern historians who are working on interesting projects,” says Hamlin. “It’s not just about having the time to do research but to do it in this kind of hotbed environment of scholarship, which the IAS represents.”

One of the world’s leading centers for theoretical research, IAS has been home to such distinguished scholars as Albert Einstein, Kurt Gödel, and J. Robert Oppenheimer.

Hamlin says his 1998 book on the emergence of modern public health in 19th century Britain led to his examination of the same issues in Scotland and Ireland. “One of the things I discovered while working on that book was that the relationship between economic policy and health policy was much more significant than most people thought.”

His current research focuses on the economic causes underlying the epidemics and famine that plagued Scotland and Ireland in the early- to mid-19th century. As landlords began to convert agricultural lands to more profitable uses in the late 18th century, Hamlin says, large impoverished populations were displaced fairly rapidly. Some of the people forced to leave their land carried infectious diseases with them, and this movement created large-scale epidemics.

Hamlin notes that medical professionals in Scotland during this period had a “strikingly modern recognition” of the problem. “The main figures in medicine in Edinburgh Medical School recognized that the diseases they were trying to deal with had economic causes,” he says.

“Some of them became very active in moving from the standard boundaries of medicine into economic or developmental policy. They asked, ‘How do you set up a social system so that people who are peasants have a reasonable chance at living healthy lives?’”

In Ireland, however, the issue was complicated by a religious and cultural divide within the population, as well as a general distrust of government. The medical profession was caught in the middle, says Hamlin, divided between a small group of elite Protestant doctors in Dublin and the rural general practitioners who were Catholic.

“The profession was riven by different interests on those two sides, and certain policy decisions widened that division,” Hamlin says. “Ultimately, the Protestants at the head denied that the fever could have anything to do with the famine. The Catholics said that the fever was a direct result of the famine.”

Hamlin says he enjoys bringing these issues into the classroom, where many students interested in the history of medicine initially want to focus on pathogens.

“If you think about the relationship between fever and famine, you’re dealing with populations who may have an infectious disease but may also have various symptoms of chronic malnutrition. In these situations, simply identifying a particular infectious disease doesn’t tell you much about their health status.”

Hamlin’s previous books include Cholera: The Biography, A Science of Impurity: Water Analysis in Nineteenth Century Britain, and Public Health and Social Justice in the Age of Chadwick: Britain, 1800-1854.

After his fellowship at the IAS, Hamlin plans to continue his work on environmental history and the history of medicine. His next project, he says, may be to examine these same issues in India.

“I’m particularly curious about how the medical profession responds in situations where there is poverty—and especially where there is malnutrition.”