The Great Lakes’ coastal wetlands are among the most diverse ecosystems in the United States. But after years of industrial traffic and development, the wetlands have shrunk by nearly 50 percent. Hoping to stem the tide of ecological damage, teams of researchers in the summer of 2011 began a five-year assessment of the wetlands’ deterioration.

Capturing these efforts on film were Collin Erker and Erin Moffitt, both juniors in the University of Notre Dame’s Department of Film, Television, and Theatre. 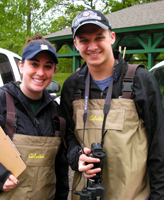 The students got support for their project through an Undergraduate Research Opportunity Program grant from the College of Arts and Letters’ Institute for Scholarship in the Liberal Arts—and from Gary Lamberti, professor and chair of the Department of Biological Sciences, who served as advisor on the project.

“Collin and Erin really drove this project from start to finish,” he says. “My graduate students helped them learn the ecology of coastal wetlands, but Collin and Erin were in charge of all aspects of the film.”

The two faced many challenges, he says, including understanding and articulating complex research and adapting to difficult environmental conditions.

“Collin and Erin traveled with our wetland field crew and shot in some pretty tough conditions, often up to their knees in mud, sometimes in the rain—all the while trying to not interfere with the research that was going on.”

Erker, who also majors in preprofessional studies (the College’s pre-med program), says it was biology graduate student Matthew Cooper who initially suggested the project to him.

“It was perfect for me because it combined my interests in both film and the sciences,” Erker says. “I have always loved nature programs on the Discovery Channel and National Geographic and realized that creating this documentary could be a great adventure.”

According to Moffitt, documenting the wetlands research was also an excellent lesson in the realities of documentary filmmaking.

“What we had in mind completely went kaput,” she says. “We were going to do a day-by-day story, and then we learned that we needed to do more theme by theme, because if we did day by day, it would have been a lot longer and very repetitive.”

Despite all the challenges the two undergraduates faced, Cooper says the finished product exceeded his expectations. “I had envisioned a 15- to 20-minute documentary with just a couple of interviews,” he says. “The fact that they were able to produce a high quality 37-minute film with many interviews and lots of great footage reflects Collin and Erin’s passion for filmmaking and their commitment to excellence.”

The duo has submitted WaterLogged to a number of film festivals, Moffitt says. “We want to get across what we learned—that the costal wetlands are imperative to the ecosystem we know, especially as a school in the Midwest.”

While continuing to promote Waterlogged, Erker and Moffitt are already at work on their next project.

“We are planning to make a documentary about internships for the American Pavilion at the Cannes Film Festival along with several other Notre Dame students,” Erker says. “We will travel to the Cannes after the end of this semester and spend the entire time at the festival shooting for the documentary.”