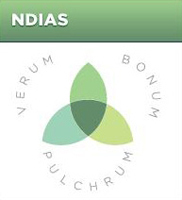 In its first year, the Notre Dame Institute for Advanced Study (NDIAS)—inspired by the classical values of beauty, goodness and truth—began transforming the academic landscape through an annual conference, lecture series and fellowships.

“The institute seeks to have a broad, meaningful and visible impact on the research of the University, the academy and the world,” says Vittorio Hösle, NDIAS director and Paul Kimball Chair of Arts and Letters in Notre Dame’s Department of Russian Languages and Literatures.

The NDIAS, established in 2009 as one of the University’s Strategic Research Investment initiatives, supports research related to ultimate questions and questions of value, especially as they engage the Catholic intellectual tradition.

The agenda of NDIAS is open, permitting fellows to pursue outstanding research in all areas. Discourse is shaped by an emphasis on broad questions that link multiple areas of inquiry, allowing scholars to examine questions beyond the narrow boundaries of their discipline. Catholic dedication to the wholeness of knowledge means that no questions are off limits.

The NDIAS offers two types of fellowships that encompass all disciplines: residential fellowships for faculty and scholars, and graduate student fellowships.

The inaugural class included eight residential and two graduate fellows from a variety of academic disciplines and countries who lived and developed as a community of scholars, inviting conversations that are global in scope.

The institute’s first conference, held last year, focused on the nature of beauty. The three-day event brought to campus eminent scholars including Maxim Kantor, acclaimed Russian painter, novelist, and essayist, as well as anthropologists, artists, composers, economists, historians, and theologians from universities around the world.

“We try to create an engaging relationship with the visiting scholar and students and faculty,” Hösle says. “Maxim’s visit crossed a number of interdisciplinary boundaries; he delivered a series of lectures dealing with political life in Russia, which drew in the German and Russian language departments and fellows from the Nanovic Institute. He also presented a lecture and demonstration at the Snite Museum of Art, and spent a day doing critiques of graduate students’ work in the Department of Art, Art History, and Design.”

Interaction across disciplines and national boundaries is critical to the University’s continued success as a premier international research university, says Hösle.

The 2011 conference, focused on the nature of goodness, will be held April 4 to 6, featuring 17 leading scholars and other experts from a wide variety of disciplines, including biomedicine, engineering, law, philosophy, political science, psychology, and theology. The conference will address significant questions such as the nature of values, biological factors that have rendered the evolution of moral behavior possible, and how engineering can contribute to a better world.

Two NDIAS publications will serve as resources for scholars and the public: “The Idea of a Catholic Institute for Advanced Studies,” and a collection of essays presented at last year’s conference.

“The institute provides an atmosphere where the most talented graduates and undergraduates develop pleasure in the life of the mind,” says Hösle. “It’s important to stay in touch with students because they inspire you not just with their knowledge, but with their questions.”