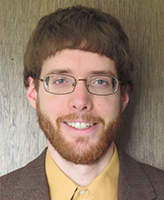 Timothy Miller, a Ph.D. student in Notre Dame’s College of Arts and Letters, was awarded a Mellon Foundation/American Council of Learned Societies (ACLS) Dissertation Completion Fellowship for the 2013-14 academic year.

Miller is the third graduate student in the University’s Department of English to receive the prestigious honor in the last four years. ACLS awards only 65 fellowships nationwide each year.

“Tim is the latest of a series of stellar doctoral students in English to win national dissertation fellowships,” says Professor Valerie Sayers, chair of the Department of English. “Tim’s work on Chaucer is highly original, and his professors characterize him as both meticulous and innovative, especially in his use of digital tools.

“His prestigious fellowship is a testament to his broad-ranging creativity and diligence, as well as an affirmation of our graduate program in general and our medieval program in particular.”

Miller’s research focuses on the literature of the late Middle Ages. His dissertation, “Closing the Book on Chaucer: Medieval Theories of Ending and the Ends of Chaucerian Narrative,” analyzes Chaucer’s narrative endings as the key battleground in the poet’s complex reception history, whether in later medieval England, in medieval and early modern Scotland, or the present day.

“The funny thing is that Chaucer became known as the father of English poetry without ever finishing much of anything. So, it’s inspiration to all of us, I suppose,” says Miller. “And, when a poem didn’t have an ending, the scribe in the Middle Ages would have the option of filling in his own ending or finding some other way to fill in the gaps.

“There is a lot of research on particular endings, but I’m making a larger argument about how these endings—not just in Chaucer’s time or the century after, but even today—are the key places where people try to control Chaucer’s meaning for various purposes.”

Miller’s research situates Chaucer’s endings in what can be reconstructed of medieval narrative theory and then examines how and why so many later authors rewrite or otherwise intervene in Chaucer’s endings. In various regions and times, to ‘close the book’ on Chaucer has constituted a political or nationalistic act as well as a poetic or aesthetic one, he says. He also makes use of digital tools to examine how Chaucer’s endings continue to reappear in new contexts far beyond the Middle Ages.

Miller says he was drawn to Notre Dame by the outstanding reputation of its interdisciplinary program in medieval studies and the quality of the faculty. In particular, he appreciates the relationship he has had with his adviser, Kathryn Kerby-Fulton, the Notre Dame Professor of English.

“Not only is Kathryn Kerby-Fulton an internationally renowned scholar, but she is a great adviser. She is genuinely interested in her students’ research and in helping them succeed.”

Looking ahead, Miller says he plans to continue to focus on late medieval literature and envisions another project on Chaucer—this time examining his connection to medieval science.

“Even though medieval science as it existed was more astrology, alchemy, things that don’t seem like science to us, I think there’s an argument to be made that Chaucer engaged with the science of his day in interesting ways.”