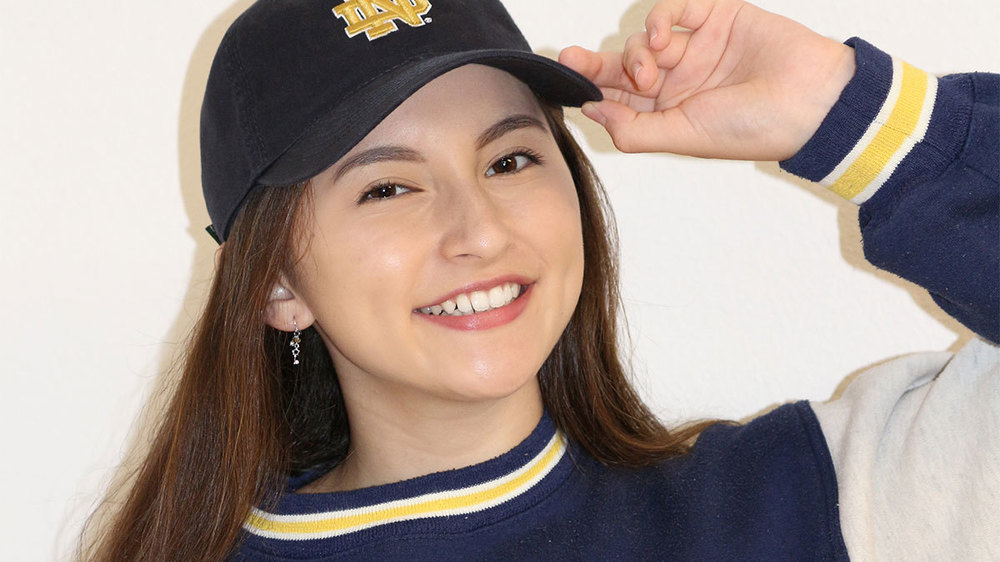 She was in her high school Latin class, reading a poem by the Roman poet Catallus about the death of his brother, when her teacher shared that he had connected with the poem after his own brother had passed away.

“I realized that we are so far apart in time, but we’re really not that different,” Jurcsak said. “We still feel the same emotions of love and grief and joy. I think when we ground ourselves in that emotional similarity, we get to see people of the past not as aliens or entirely separate from us, but we see ourselves in the people we’re studying.”

Connecting with history on the basis of shared humanity gave Jurcsak a new perspective on the subject — and inspired her to major in Greek and Roman civilization in the Department of Classics when she came to Notre Dame.

The program has grown her fascination with the broader connections between ancient and modern society.

“I think there are a lot of parallels that get swept over when you talk about the broad study of classics, but when you actually dive into the social history or the political strife, you’ll see there are a lot of fascinating similarities,” Jurcsak said. “It’s not just studying ancient history — it’s connecting it to the modern world.”

“Arts and Letters pushes you to think beyond what you thought was right, and it makes you uncomfortable — but in a good way. At first, you don’t want to push and pull your beliefs and ideas, but then you realize it’s so worth it when you discover new perspectives that you couldn’t have arrived at on your own and that might even make more sense. That kind of good discomfort — that’s the value of an Arts and Letters education to me.”

Exploring those connections led Jurcsak to an unexpected research opportunity in her home state of Hawaii over this year’s extended winter break.

When Notre Dame announced that there would be no classes in December or January, Jurcsak began looking for opportunities to further develop her academic interests while at home in Waipahu, Hawaii.

After seeking advice from a faculty advisor in the Building Bridges Mentoring Program, Jurcsak reached out to Luca Grillo, chair of the Department of Classics, asking him to write a letter on her behalf to the classics department at the University of Hawaii.

Through this connection, Jurcsak secured a research position on a project focusing on the simultaneous arrival of the English language and classical education to Hawaii — both brought to the islands by American missionaries in the 1800s.

Over winter break, Jurcsak combed through newspaper articles published at the time to analyze how Hawaiians perceived classical civilization.

“It’s fascinating to see what they think because their own history and culture is vastly different, and it gives us a unique perspective on classical history that’s really interesting” Jurcsak said. “It’s actually really fun. Research may seem monotonous, but it’s not, because you get to see these little surprises every day.

“I’m delving deep within my major and finding a completely different side of it that I didn’t think was possible.”

While she examines classical civilizations from a new perspective, Jurcsak is also enriching her own perspective of home.

“I didn’t take many Hawaiian history classes in high school, and when you live in a place for a very long time you kind of take it for granted,” Jurcsal said. “This research opportunity really helped me be more appreciative of the home that I live in. It’s fascinating seeing how the Hawaiian people are so open to other stories and other civilizations.”

Interested in expanding her knowledge of current social and political systems, Jurcsak took a class on international relations and decided to minor in the Hesburgh Program in Public Service.

“While I enjoyed learning about the theories, what intrigued me most about the class was putting those theories into practice and advocating for how they are evident in our world today,” she said. “I like how there are justice, leadership, and values aspects to the minor. Not only do we discuss theories, but we also apply them to create effective and moral solutions to real-world problems.”

As a sophomore, Jurcsak is still exploring her various areas of interest and how they interact, but she already plans to complete a senior thesis that incorporates both classics and public policy.

“It’s really fun thinking about what the trajectory of the U.S. would be if we adopted different ancient government structures,” Jurcsak said. “A thesis looking at the U.S. today through the lenses of these classical civilizations might not yield any groundbreaking theories, but it would provide a new perspective nonetheless to inspire new ideas about domestic affairs.”

Jurcsak also has a minor in Japanese and performs with the Not-So-Royal Shakespeare Company and the Dance Company of Notre Dame. Her study of classics — and finding that emotional connection to the past — has also led to a deeper understanding of Shakespeare.

“Elizabethan English isn’t easy to understand for a modern ear, but when you really work through the text, the writing evokes common emotions that we can still relate to,” Jurcsak said. “A great example of this is how iambic pentameter mimics a heartbeat through the rhythm. The meter helps ground me to the text. Since everyone has a heartbeat, everyone has the tools to play with the text and find their own personal connection to Shakespeare’s words.”

Jurcsak is excited by the opportunities to come in the years ahead of her at Notre Dame, and whether she ends up conducting more research, writing a thesis, or studying abroad, she knows there will be many more perspectives to explore.

“Arts and Letters pushes you to think beyond what you thought was right, and it makes you uncomfortable — but in a good way,” Jurcsak said. “At first, you don’t want to push and pull your beliefs and ideas, but then you realize it’s so worth it when you discover new perspectives that you couldn’t have arrived at on your own and that might even make more sense. That kind of good discomfort — that’s the value of an Arts and Letters education to me.”