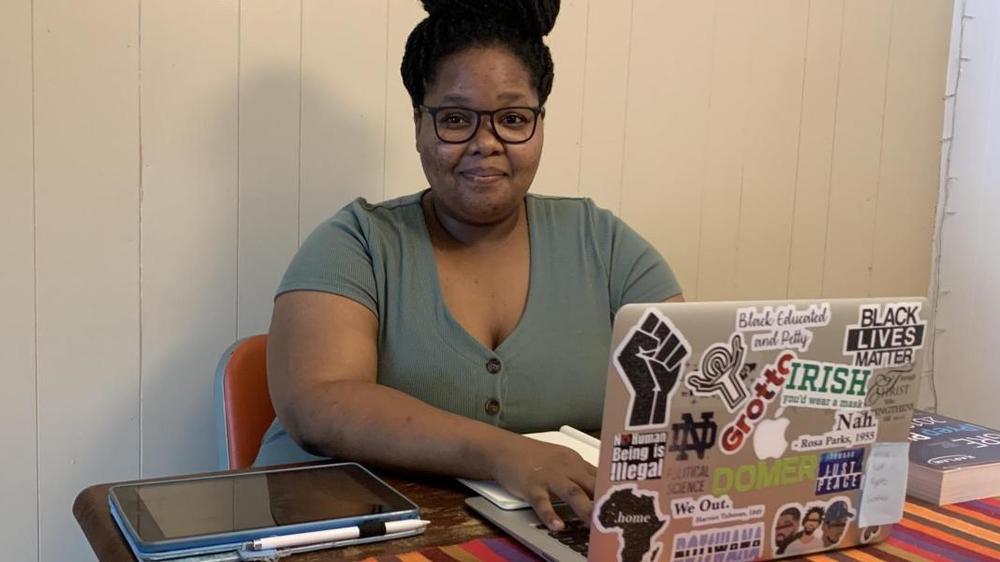 Oneile Baitlotli, a political science major, spent most of her junior year planning the summer research project abroad she needed to earn a minor in International Development Studies: a study of how to help low-income families in her native Botswana gain access to affordable early childhood education.

“That time in a child’s life is the most integral part of their academic career, so if you fail to lay a proper foundation then, they are set up to fail years later,” she said. “In Botswana, the government is putting so much money into fixing the education system, but the focus has been on the later grades, which may be futile because that is not where the problem begins.”

But in March, the coronavirus largely suspended overseas travel and closed international borders. And for Baitlotli and nearly a dozen other juniors in the Kellogg Institute for International Studies’ IDS program, COVID-19 seemed to put their ability to graduate with the minor in jeopardy.

The IDS minor prepares undergrads for development work or graduate-level study. Each student is required to complete a significant research project that includes internationally oriented fieldwork before graduation; most do so in the summer before their senior year.

That project forms the basis of their capstone project and is months, if not longer, in the making. Students take an intensive research methods course, usually during their junior year, work closely with faculty advisors to plan their research, and submit detailed grant proposals to Kellogg before they ever step foot out of the country.

Associate Director Holly Rivers, who heads the Institute’s undergraduate programming, said some IDS minors were forced to abandon their original projects in mid-March because they couldn’t go abroad and do the fieldwork they needed to complete their research.

That meant they had to develop new research projects within a matter of weeks to earn the minor.

“These students had been working toward their field projects for one to two years, so we said we’d work with them in any way possible to make this happen,” Rivers said.

With help from Kellogg, all of the IDS juniors were able to come up with research projects they could do virtually. A few, like Baitlotli and Bridget Hart, undertook projects that veered far from their initial research topics, while others, like Laura Pires Henares, were able to adapt their original projects to a virtual format.

Rivers noted that trying to do fieldwork from afar – without being immersed in a culture or spending time with the people you’re working alongside or interviewing – isn’t easy.

“They did something that was amazingly difficult, and they learned new skills that they’ll be able to use throughout their academic and professional careers because of it,” she said.

‘I was so disappointed’

But after the coronavirus forced her to stay in South Bend for the summer, she knew she couldn’t do the interviews. As in many developing countries, many of those she planned to speak with didn’t have access to the Internet or Zoom meetings. Baitlotli, who is also minoring in peace studies, had planned to travel to Botswana to interview educators and government officials about the lack of affordable education options for pre-primary students.

“I was so disappointed that all my work was gone,” she said. “At one point, I contemplated just dropping the minor and calling it quits because there was nothing I could do.”

With guidance from her advisor Jaimie Bleck, an associate professor of political science and Kellogg faculty fellow, Baitlotli began to consider other research projects for the summer. Bleck ultimately connected her with a Juliana Otieno, a pediatrician and Notre Dame alum who runs the Rusalia Resource Foundation, which sends girls in eastern Kenya to high school.

Baitlotli was tasked with creating a mentorship program for the girls that focused on health advocacy, academics, and environmental management. Her research has included interviewing African scholars who have gone through similar mentorship programs, and she’s now working with the foundation to lay plans for its mentorship program even as she writes her capstone paper.

“It’s still quite surreal to me that I’m being entrusted to do something so big,” she said.
“It has the power to be really impactful, and I just hope I can do it justice.”

Baitlotli doesn’t regret having to give up her initial project, and said the experience has exposed her to new ideas and taught her about the unpredictability of development work.

“Had I been able to go to the field, there’s no way I would have been able to grasp how things can just change, and how people who work in development have to be able to just pivot,” she said.

Once the pandemic hit, Hart’s research project seemed especially relevant: how does mobile technology impact health literacy among mothers in the developing world? In other words, where do these mothers get their health information from? Hart hoped to develop an intervention that would address any gaps she found in health literacy.

But because her project, which the computer science major developed with the help of advisor Steve Reifenberg, was going to be centered on in-person interviews in the Dominican Republic, Hart knew it wouldn’t work: “I didn’t think I could get good data from afar. Given how hard remote classes were, I decided that trying to make this happen with remote data wasn’t worth the time and effort.”

Kellogg steered her to the Pulte Institute for Global Development, which was evaluating a U.S. Agency for International Development-funded workforce development program in Honduras.

For her summer research project, Hart assessed how gender impacted participants’ experiences with the program. She took raw transcripts from interviews and worked with a team to put them into a coded spreadsheet.

It was so different from her initial project idea that “it wasn’t even a pivot. It was a full restart.”

“It was definitely hard,” she said of having to abandon her Dominican Republic project. “You work toward that project throughout the whole minor, so I had been working toward it since my sophomore year. I did a ton of front-end work and didn’t get to see it come together, but that happens sometimes in life.”

But Hart’s work with Pulte gave her valuable experience in working with a team and introduced her to new ways of doing research.

“Being a computer science student, I hadn’t done significant qualitative research before. Now, I’m starting to work through the data analysis side.”

It also taught her about flexibility.

“Usually it’s a requirement for the minor that you have to do fieldwork, but they helped us adjust to the idea that this is just the way the world is right now,” she added. “We can’t stop doing research just because there’s obstacles.”

‘It shook my confidence’

Henares returned to her home country of Brazil, where she planned to do her summer research, just before COVID travel restrictions were put in place. An economics and German double major, she wanted to use data to quantify how socioeconomic factors influenced Brazilian students’ chances of getting into college.

The project was complicated and required a significant amount of coding, so she planned to work closely with a research center in São Paolo that would provide her with feedback and support.

COVID, however, scattered the network of researchers at the center as they left the city because of the pandemic. Most went to more remote locations, making it impossible to communicate with them via Zoom.

That left her without the sounding board she expected to have on the ground.

“I couldn’t go to the research center or show people my codes and get their opinion about my work as it was in progress,” Henares said. “It shook my confidence. I was worried if my results were going to be accurate enough or if I was getting them in the right way.”

Back in South Bend, Associate Professor and Kellogg Faculty Fellow Patrizio Piraino, who had advised her in the planning stages of the project, stepped in to offer assistance from afar. And while the coronavirus forced her to change some aspects of her project, such as contacting new sources and doing more literature research, it didn’t derail her work.

“I was able to keep my initial research project in the sense that I was able to fulfill the investigational point, but the way I did it was very different than what I thought I was going to do,” she said. “I was happy with the results and I was able to verify them and check them.”

Henares was surprised to find that parental education, not household income, as she had hypothesized, was the biggest determinant in whether Brazilian students made it to college.

She was also surprised at how prepared she was to deal with the challenges of fieldwork, thanks to her research methods class.

“We learned that dealing with unexpected situations would be a constant, and we’d have to deal with adversity,” she said. “The class prepared me to deal with the unexpected.”