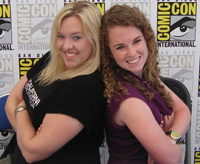 Television plays a role in the daily lives of most Americans—but its influence can be even greater among the fan groups that spring up around popular shows.

To explore the interplay between one television director’s work and the fan culture it inspires, Notre Dame seniors Stephanie DePrez and Ellie Hall traveled to Southern California on Undergraduate Research Opportunity Program grants from the College of Arts and Letters’ Institute for Scholarship in the Liberal Arts.

The students—both majors in the Department of Film, Television, and Theatre—interviewed industry professionals in Los Angeles and attended the annual San Diego Comic-Con International, a mecca for fans of many pop-culture genres, from graphic novels and video games to film and television.

While DePrez used the opportunity to shoot a documentary, Hall gathered vital research for her senior thesis. Both seniors focused their work on writer/director Joss Whedon, creator of Buffy the Vampire Slayer and Firefly, among others.

“Whedon’s position as a television auteur, his commitment to pushing storytelling media forward, and his aptitude for creating diehard fanbases with whom he openly communicates make him one of the most relevant subjects of television study today,” DePrez says.

While at Comic-Con, the two attended Whedon-led panel discussions; interviewed fans, showrunners, writers, and executives; and pored over any and all information they could find to aid in the development of their projects.

“Being able to be at Comic-Con and watch the ways in which [Whedon] interacts with the fanbase was crucial to our research,” Hall says. “We heard him speak—and spoke to him—on three different occasions.”

Both students agree that a team approach was key to getting the most out of their time at the busy convention. They shared what they were learning and helped keep each other focused and motivated.

“We would divide and conquer,” Hall says. “The research was a crazy whirlwind of interviews, note taking, and more strategic planning than most generals devote to military campaigns. I would be arranging interviews on the phone while Stephanie was off standing on a chair recording B-roll; then we would rush off to secure passes to get into the VIP section of panels.”

DePrez says the experience, although difficult, was the biggest “baptism by fire” she could have received. “Everything I learned, from how to use the camera to how to make tough editing decisions, will be an asset to me once I graduate.”

Hall and DePrez also discovered what it means to lead a research project from conception to completion—and that it doesn’t always turn out as expected.

DePrez focused her documentary on the impact Whedon’s shows have on pop culture and whether his dedicated followers, in turn, can influence the medium. Similarly, Hall examined the symbiotic relationship between Whedon and his fanbase in order to gauge the power of cult icons to enact change in the industry. Research in the field forced both students to revise their initial assumptions.

“The interviews that I conducted with showrunners, writers, and executives completely changed my ideas about how the entertainment industry deals with cult fandoms,” Hall says. “I had to change the scope of my thesis.”

Likewise, DePrez says she started to panic at first because no one was talking about what she wanted to be the focus of her film.

“Instead of discussing fan ownership of text—part of my original thesis—most of my industry insider interviews talked about fans’ inability to influence television as it is happening,” she says. “Eventually, I realized my documentary had to change to work with what I found.”

But, she says, the challenge turned into an exciting opportunity to present a new argument within the realm of television studies.

“Not only have I been able to push myself technically as a writer and editor,” DePrez says, “but I’ve discovered through my research that my topic is relevant and new.”

Throughout this experience, both Hall and DePrez say that Christine Becker, associate professor in the Department of Film, Television, and Theatre, has been a fundamental source of support.

“I cannot overemphasize the role that she has played in my academic, intellectual, and personal growth throughout my undergraduate career at Notre Dame,” Hall says.

“Fan studies is a hot topic in the world of television right now, and Professor Becker helped me home in on a facet of it that would be worthwhile to pursue,” she says. “As my thesis has changed, she’s been the first to point out how interesting my findings are.

“Television is the medium of our times,” DePrez says, “and it is important to recognize the influence it has.”