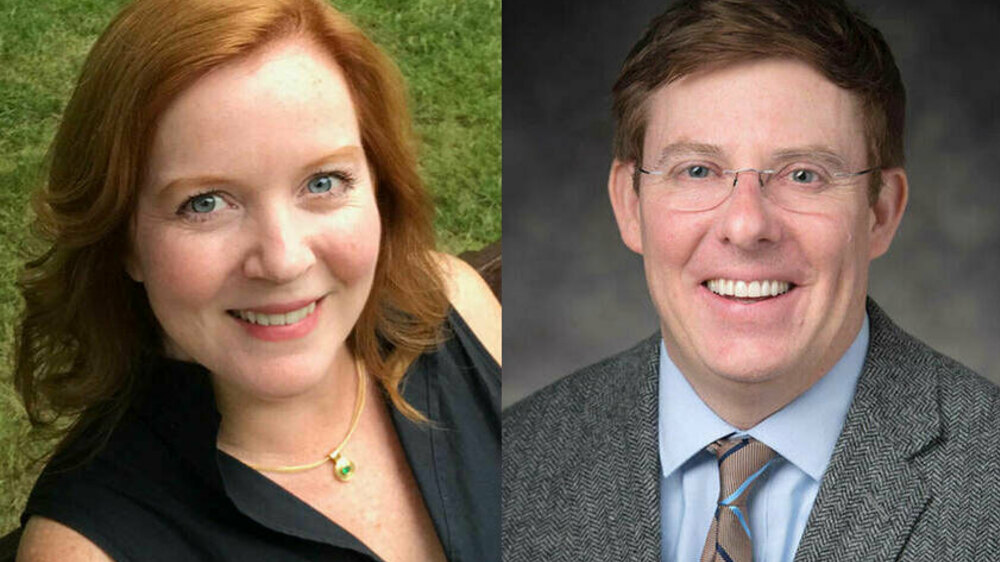 Two faculty members in the University of Notre Dame’s College of Arts and Letters — Sophie White and John Betz — have been awarded grants from the National Endowment for the Humanities in its last round of funding for fiscal year 2022.

A professor in the Department of American Studies, White was awarded an NEH Public Scholars grant to continue work on her book project, Strangers Within: A Cultural and Genomic History of Red Hair.

Betz, an associate professor in the Department of Theology, received an NEH Scholarly Editions and Scholarly Translations grant to create a critical edition of F.W.J. von Schelling’s original 1831-32 Munich lectures on the philosophy of revelation.

The awards are part of $31.5 million in NEH funding offered to 226 humanities projects across the country that “will foster the exchange of ideas and increase access to humanities knowledge, resources and experiences,” said NEH Chair Shelly C. Lowe in a release Tuesday, Aug. 16.

White’s newest project juxtaposes cultural history with new genomic discoveries to analyze how redheads — who carry the genetic variant MC1R — have been alternately abused, glorified and discriminated against through a wide range of times and locations, from ancient Egypt to the present-day United States.

“Strangers Within analyzes redheads’ marginalization, for while red hair is a rare visual marker that is genetic and immutable in nature, what produces and justifies the reaction to redheads is not (e.g., the trope that ‘gingers have no soul’),” she said. “Their red hair has at times marked them out as members of outsider groups, but because it is a recessive gene, redheads have also been targeted as outsiders within. That distinction lies at the crux of this book, as I explore through genomic findings — which include a swath of medical singularities particular to redheads — Norse mythology, Celtic folklore, slavery in ancient Rome, the Inquisition and antisemitism, as well as art historical, literary and pop culture representations.”

White is a concurrent professor in Africana studies, history and gender studies and a faculty fellow in the Nanovic Institute for European Studies, the Klau Institute for Civil and Human Rights and the Initiative on Race and Resilience. Her most recent book, Voices of the Enslaved: Love, Labor, and Longing in French Louisiana, which was supported by an NEH fellowship, garnered eight book awards and offered a unique glimpse into the lives of enslaved people in the 18th century through courtroom testimony.

While her new project may seem a departure from Voices of the Enslaved, White said the book fits neatly within the arc of her research.

“This book offers at its root a stealthy way to shine a light on how hair (red) and skin (freckled) could simultaneously excite and repel, inciting fear, discrimination and violence on the basis of color,” she said.

Betz, whose research focuses on German philosophy and theology from the 18th to 20th centuries, will co-direct the project “Schelling’s Philosophy of Revelation” with Marcela García-Romero, an associate professor of philosophy and expert on Schelling who teaches at Loyola Marymount University. Their project coincides with a resurgence of international interest in Schelling and a larger project funded by the Bavarian Academy of Sciences and Humanities to produce a complete historical-critical edition of Schelling’s works.

It is a project Betz has hoped to do since he began his graduate studies in Tübingen, Germany, and lived in the seminary where Schelling once roomed with German philosophers Georg Wilhelm Friedrich Hegel and Friedrich Hölderlin.

“In Tübingen, Schelling is legendary,” Betz said. “You can strike up a conversation about him with just about anyone, from other students to shopkeepers. Ever since then, Schelling has stuck with me and is still one of my favorite philosophers.”

According to Betz and his team, which includes scholars from the United States, Canada and Mexico, Schelling’s 1831-32 Munich lectures represent one of the most profound attempts of any modern philosopher to wrestle with the nature and significance of religion and specifically with claims of divine revelation — or moments of divine self-disclosure.

“It’s not just that he’s a great philosopher who dared to think about big questions,” Betz said. “It’s that he took revelation with utmost seriousness and tried to understand what it means for us and for the world. Simply put, he thought revelation was worth all his mind.

“And that’s what connects Schelling to Notre Dame, because thinking about revelation in all earnestness is what the Catholic intellectual tradition is all about,” Betz said. “That’s why I’m excited about this project and very grateful to the NEH for being willing to support it.”

Originally published by Carrie Gates at news.nd.edu on August 18, 2022.