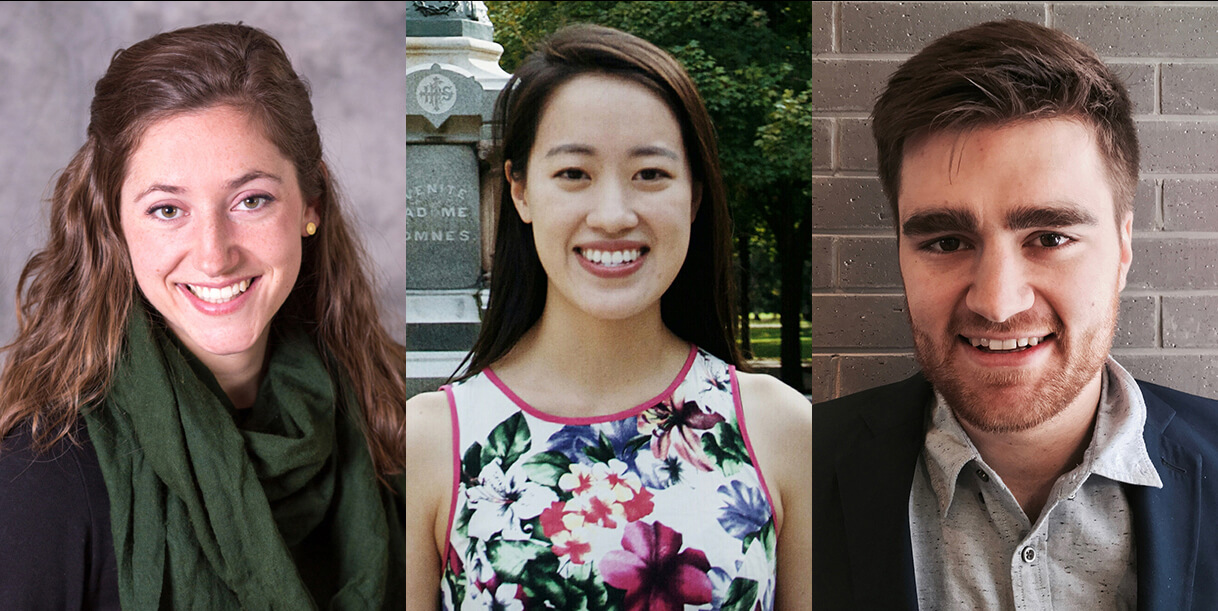 A trio of Notre Dame students and alumni have been named Yenching Scholars, a globally competitive award that provides a full scholarship and stipend to pursue an interdisciplinary master’s degree at China’s top university.

“The fact that three of our applicants — all of whom studied in the College of Arts and Letters — were selected in this first year of the partnership is a testament to the strength of the University’s preparation of our students to take on complex contemporary issues on a global stage,” said Jeffrey Thibert, associate director in Notre Dame’s Flatley Center for Undergraduate Scholarly Engagement (CUSE).

John “Jake” Grefenstette ’16, a theology major, is part of the current cohort of 125 students from 40 countries and more than 80 universities worldwide.

Yenching Scholars engage in an English-language master of Chinese studies program designed to equip students with a nuanced understanding of China and its role in the world. Peking University modeled the program after the Rhodes Scholarship and attracts young people from around the globe who show promise to lead and innovate in their fields.

Kennedy, a Hesburgh-Yusko Scholar and winner of the Yarrow Award in Peace Studies at Notre Dame, spent the past year teaching English as a second language in western Massachusetts. Her anthropology senior thesis focused on notions of identity and dignity within the Mapuche community in Chile and her peace studies senior capstone argued for the need for dialogue between supporters and opponents of now-President Donald Trump.

She hopes being a Yenching Scholar will further her study of the relationship between culture and human rights.

“China occupies a specific yet significant niche within this area, and Yenching Academy's program seemed like a perfect way to study this concept within an academic setting while being culturally immersed,” she said. “I am incredibly honored to have been named a Yenching Scholar, and I look forward to what the year ahead holds.”

Ng, a Kellogg International Scholar and CUSE Sorin Scholar minoring in business economics, is completing a senior thesis on China’s efforts to develop soft power in Latin America. A Greater China Scholar who served as a vice president of the Student International Business Council, she has spent breaks working as an analyst at Deutsche Bank in New York, volunteering in Ecuador, and conducting research in India, Cuba, Tibet, among other locations.

She was drawn to the Yenching Scholars program because of the opportunity to study China from within the nation’s capital.

“I hope that this program will allow me to gain a more nuanced understanding of Chinese domestic politics, as well as my current area of study — China-Latin America relations,” she said. “More importantly however, I'm most excited for the opportunity to build China connections for Education Bridge — an education project in South Sudan that I have been working on with Notre Dame classmates and professors.”

Romeo, a former walk-on for the Notre Dame football team, wrote his senior thesis on the Chinese government’s handling of grassroots movements in Wukan village. Now earning a master’s degree in theology from Santa Clara University, where he played basketball from 2014 to 2015, he is a 2016-17 Blakemore Fellow and founded a Beijing-based company that advises Chinese students throughout the U.S. college application process. He also appears weekly on Informal Talks, a Chinese-language TV show.

He plans to study traditional Chinese medicine during his time at Yenching Academy, then return to the U.S. for medical school and eventually practice medicine in developing parts of the world.

“Yenching Academy seeks to build bridges in a time when mutual understanding is of the utmost urgency and importance, and I am humbled to have been acknowledged as having the potential to possibly foster such discourse,” he said. “I hope to gain an understanding of intersections between Chinese and Western medicine, and use this knowledge as the foundation for my medical practice in developing parts of the world.”

Students and alumni who are interested in learning more about this national fellowship opportunity should visit the Yenching Academy page on the website of the Flatley Center for Undergraduate Scholarly Engagement (CUSE).