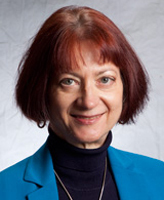 Notre Dame theologian Jean Porter has been elected to the American Academy of Arts and Sciences (AAAS), one of the nation’s most prestigious honorary societies.

Founded in 1780, the academy has elected intellectual leaders from generations of Americans including George Washington and Benjamin Franklin in the 18th century, Daniel Webster and Ralph Waldo Emerson in the 19th, and Albert Einstein and Winston Churchill in the 20th.

“It’s a great honor—and very unexpected,” says Porter, the Rev. John A. O’Brien Professor of Theological Ethics. “What I appreciate most is the good esteem of my colleagues. To receive recognition from them is very important to me.”

Porter’s teaching and scholarship focus on Christian ethics and the history and interpretation of the natural law tradition in Catholic ethical reflection, particularly the moral theology of St. Thomas Aquinas.

“I began to read Aquinas many years ago because he is so important to contemporary Christian moral thought,” she says, “and I came to see that he offers distinctive perspectives on many moral questions.”

Porter’s books include Nature as Reason: A Thomistic Theory of Natural Law, which develops a contemporary theological account of natural law, and Natural and Divine Law: Reclaiming the Tradition for Christian Ethics, which offers an interpretation of the scholastic concept of natural law.

Her most recent, Ministers of the Law: A Natural Law Theology of Legal Authority, was honored by the Catholic Press Association as one of the top three theology books of 2011.

She is currently writing a new book that will explore “the ways in which Thomistic and scholastic conceptions of the virtue of justice would transform contemporary understandings of justice.”

In addition to her work in the Department of Theology, Porter is a member of the research faculty in the College of Arts and Letters’ Gender Studies Program and a fellow in the University’s Medieval Institute.

When she is inducted on October 6 in Cambridge, Mass., Porter will join an AAAS membership that includes more than 250 Nobel laureates and more than 60 Pulitzer Prize winners.

“Election to the academy is both an honor for extraordinary accomplishment and a call to serve,” says Leslie C. Berlowitz, AAAS president. “We look forward to drawing on the knowledge and expertise of these distinguished men and women to advance solutions to the pressing policy challenges of the day.”

A total of 23 Notre Dame faculty members have been selected as AAAS fellows, including 21 affiliated with the College of Arts and Letters.

Recent inductees include Karl Ameriks, McMahon-Hank Professor of Philosophy; Scott Appleby, a professor of history and John M. Regan Jr. Director of the Kroc Institute for International Peace Studies; University President John I. Jenkins, C.S.C., a longstanding member of the Department of Philosophy faculty; and Scott Mainwaring, Eugene P. and Helen Conley Professor of Political Science and director of the Helen Kellogg Institute for International Studies.