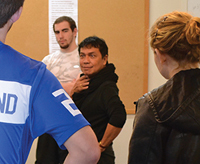 After reviewing concepts—closed/open, light/shadow—Anton Juan, senior professor of directing and playwriting in the Department of Film, Television and Theatre (FTT), talks students beyond the narrow definitions of the words.

With a sweeping gesture, Juan instructs groups of three students to wordlessly portray each concept to the group. Though often laughingly, the triads leap, shuffle and contort.

Juan, a member of the Notre Dame faculty since 2005, is internationally recognized for his convention-challenging work. Juan completed his Ph.D. in semiotics at the Kapodistrian and Panhellenic University of Athens, Greece, and—for his contributions to the arts—has been twice knighted by the French government, receiving the Chevalier de l’Ordre des Arts et Lettres in 1992 and the Chevalier de l’Ordre National de Merit in 2002.

In Performance Analysis, a three-credit theater course Juan taught in fall 2012, majors from a cross-section of the Department of Film, Television, and Theatre’s disciplines are guided to the sources of performance.

The goal, says Juan, is for student actors to develop critical thinking.

“I want them to see performance with a critical eye, one that takes into consideration the text and the counter text—the way the company uses the text,” he says. “The attitude of the playwright is also important, and the period in which the play was written. How does the performance resound to an audience in the present time, in the moment of its happening from the moment it was originally conceived?” 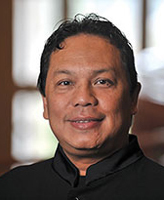 Juan once staged Madama Butterfly and set it in the context of the bombing of Nagasaki, he says, “to articulate more the idea of colonized love versus pure love, and the conflict of cultures.”

He teaches students semiotic method, he adds—the study of signs and symbols and their meaning and function in language.

“I want them to look for the basic element of sound, to words to oppositions of concepts, toward attitudes toward either side of the conflict. From looking at the attitude of either side in a conflict, we then look at the ideology of the author and the work.”

When Juan says to the class, “Now with words, I want you to give me different shades of your monologue so that you can look for light and shadow,” a student leaps up.

“I just have the one that I always use,” the student says.

“Go there,” replies Juan, from the back of the room. And for 10 minutes the room is still—except a few nervous laughs from the class.

Launching into his monologue, the student’s soft recitation peaks, reaches a snarling crescendo before ebbing again. Students clap, but all Juan says is, “Thank you. Now say that more clearly. Say it first at zero.”

“At zero?” the student is baffled. “Zero volume?"

Juan doesn’t elaborate. “Say that at zero. This is how to try to look for light and shadow.”

The student whispers his lines. 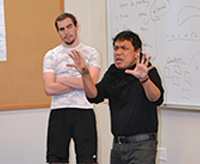 It’s not long into the next effort when Juan says, “Your eyes make it not zero.” Zero is the most difficult thing to be, and to learn, he tells the class.

“When you hard-headedly memorize, you’ve no way of evolving, and you will become mannered actors, saying your lines the same way every night without the freshness of the moment. You have to start at zero. Again!” he says to the student.

The goal, says Juan, is for the students to apply what they learn in class to self-analysis of their work, critics of their own self.

Juan comes from the Asian tradition of sensei, he notes, a Japanese word meaning “teacher,” an
honorific used to show respect to one who has achieved mastery.

“Taking things from zero speaks of the humility of an actor, the willingness of an actor to start every single time at zero, to start afresh, to make every performance new.”

The sensei is also concerned with the way the person views life and reality—that reality leads to other realities, he adds.

Juan also teaches a course on the theater and social concerns, “and in that class, I ask the students to go beyond the classroom and immerse themselves in social issues and social groups, by engaging themselves with people like migrant workers or residents in a prison. From that experience, they devise a performance that will speak to the audience about other realities that maybe we don’t know about.”

He’s currently working with the Kellogg Institute for International Studies on a series of creative works on migration issues—a project that began when he was teaching in the Notre Dame London program.

“I brought my students to Sacred Heart School in Battersea—a school where there are 105 languages being spoken. My students devised a theater piece with the students at the school on migrant stories from the point of view of the children.

“It made the parents aware that they had to leave the legacy of their memories to their children. The children and parents performed together.”

The principal was amazed, Juan adds, by the way it brought people together through the common experience of theater.