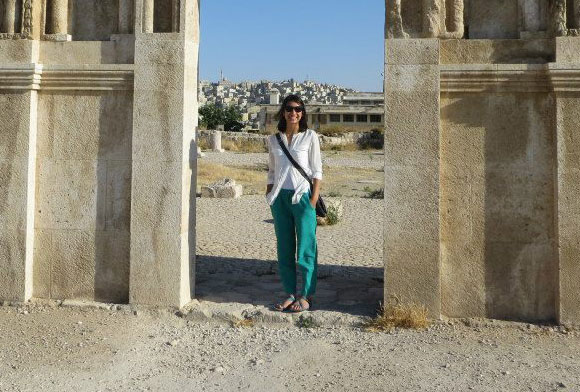 Sarah Tomas Morgan at the Amman Citadel in Jordan.

Sarah Tomas Morgan learned more from cab drivers in Jordan than she ever thought possible.

“There’s a cool give-and-take from talking to everyday people you run into, like taxi drivers,” said Tomas Morgan, who spent summer 2015 in Amman, the country’s capital. “I had some great conversations.”

Tomas Morgan was one of 60 College of Arts and Letters students who engaged in an immersive cultural and linguistic experience through the Center for the Study of Languages and Cultures Summer Language Abroad program.

Tomas Morgan’s discussions in Arabic with cab drivers often focused on cultural misperceptions. Tomas Morgan, whose mother is Filipino, frequently surprised the drivers when she told them where she lived.

From there, Tomas Morgan—a sophomore Program of Liberal Studies major and peace studies minor from South Bend—explained to the drivers how diverse America is.

She was then able to inquire about their experiences growing up in places like Syria, Lebanon, or Palestine then seeking refuge in the more stable environment of Jordan, which has historically enjoyed close diplomatic ties with the United States.

Those same drivers stressed to her that ISIS, the terrorist group making headlines during her time abroad, was not representative of the Middle East, Muslims, or Arabs as a whole.

Tomas Morgan studied Arabic at the Qasid Arabic Institute each day, alongside six other students from diverse places and academic backgrounds, advancing through a full year’s worth of Arabic in just one summer. In her free time, she also explored museums, national parks, and local arts markets.

Going in, Tomas Morgan’s only knowledge of the area was based on what she read in the news and heard from other Notre Dame students. The CSLC directors counseled her to approach the experience with openness and to seek out deeper connections—which ultimately made it more meaningful.

“We were really encouraged to initiate, in a thoughtful way, those critical conversations with people we met,” she said. “Notre Dame taught me to be sensitive to those different dynamics.” 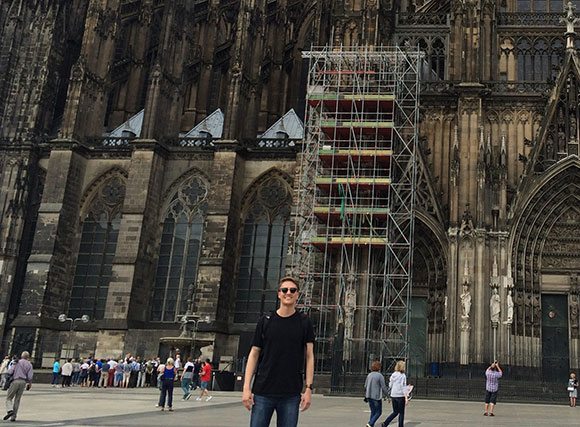 Scott Copeland at the Cologne Cathedral in Germany.

A sociology major from Fort Mill, South Carolina, Copeland is researching the German-speaking population of Belgium and their sense of European, national, and regional identity in the midst of an environment with significant multicultural influences.

During his time studying at the Carl Duisberg Institute in Cologne, he noticed abundant cultural differences.

“I was surprised by how reserved the Germans are about nationalistic issues,” he said. “You don’t see German flags very often, and you don’t hear people speak about how proud they are to be German, just because of their history with the rest of the world, and Europe in particular.”

Since returning to the U.S., the senior said, that type of cultural knowledge has caused him to be a more informed observer of international political and social issues—including Germany’s lead role in welcoming refugees fleeing civil war in Syria.

“I feel like I can understand why they’re willing to take in so many immigrants,” Copeland said. “From what I experienced, that was the kind of society they want to promote—a very open, very nondiscriminatory, very liberal society.”

Beyond his thesis, Copeland—who has a minor in business economics—hopes to remain attuned to German and European issues and cultures, whether academically or personally.

“It’s definitely something that I want to continue to be involved with throughout the rest of my life,” he said. 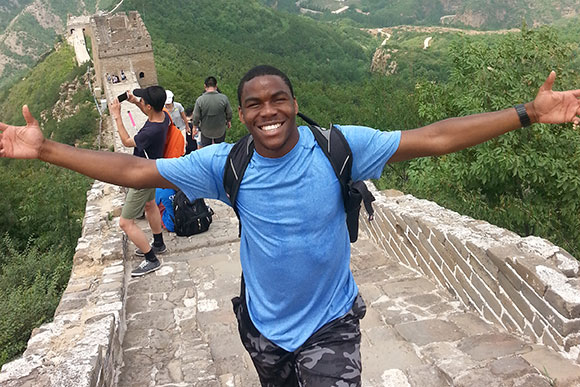 Although JesusisLord Nwadiuko had been to China once before, he said he was more immersed in the culture during the SLA program than he had been during the year he previously spent there.

Nwadiuko, a junior majoring in Chinese and Arts and Letters pre-health, had taken a gap year in China before coming to Notre Dame—exploring the country with little knowledge of the language.

Now going back after three years studying Chinese, Nwadiuko was not only able to understand the language—his liberal arts education had also prepared him to better appreciate the people he was meeting and the places he was going.

“One thing the College of Arts and Letters taught me when gathering information is to try to understand where the author is coming from,” he said. “What are the cultural aspects surrounding the author’s understanding of the subject and the way he is constructing the piece?

“When I was in China, I tried to really look at the state of China right now and some of the factors affecting the people I’m talking to. That information helped me understand the people and the environment around me.”

Nwadiuko studied at Peking University’s School of Chinese as a Second Language and also explored health care issues faced by Chinese individuals and policy questions facing the country as a whole.

No matter how different his experiences in China were from the U.S., the native New Yorker never felt too far away from Notre Dame.

On a trip to Shanghai, he attended a local Notre Dame alumni club meeting, welcoming students from the area who had been accepted to the University.

While there, he ran into a friend—one of the people who encouraged him to study Chinese in the first place—while neither was expecting the other to be in the same country, let alone the same room.

“That was a real spark, being there and seeing a familiar face,” Nwadiuko said. “I guess it’s something you don’t see too often, but at Notre Dame, you do.”

Though their experiences varied greatly, a near constant amongst SLA participants is a desire to return to their host countries.

Tomas Morgan hopes to go back to Jordan soon to revisit issues in the Middle East region through research and possibly a study abroad program.

Copeland is currently writing his senior thesis and hopes to return to Europe eventually, either in pursuit of another academic degree or in his career.

Nwadiuko plans to do more in-depth research on public health and the universal insurance system of China. He would also like to use his education to find ways to help improve the Chinese health care system someday.

The students agreed that their SLA experiences have made an impact on their studies at Notre Dame as well. For Nwadiuko, China remains on his mind as he continues his pre-health coursework.

“I think about how this is actually playing out in the place that I just came from, and how I will be able to use this if I go back,” he said. “Establishing a passion for the place in my heart has enabled me to study more passionately right now.”