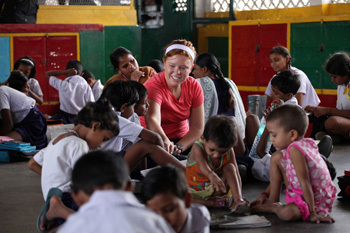 Four University of Notre Dame undergraduate students had the rare opportunity to conduct research side-by-side over the summer with the famous Irish nun Sister Cyril Mooney, known as “the Mother Teresa of education,” who has turned an elite Catholic school for girls in Kolkata, India, into an education center that welcomes the city’s street children and allows them to become advocates for social change.

The students now are readying reports on the education research they conducted through an academic partnership with 74-year-old Sister Cyril, the principal of Loreto Day School Sealdah, and recipient of one of India’s highest civilian honors. They worked, researched and served in the community and at the school, which invites children in from poorer households, including those in the slums, to learn free-of-charge alongside wealthier fee-paying students. The Loreto students serve as teachers to the Rainbows, or former street children, who now study and live at the school.

The trip was a precursor to the course this semester titled “Undergraduate Action Research Seminar in India,” offered by Notre Dame’s Institute for Educational Initiatives (IEI) and Education, Schooling and Society (ESS) minor. It was led by Tamo Chattopadhay, a native of Kolkata (formerly Calcutta) and a post-doctoral teaching scholar and IEI fellow. 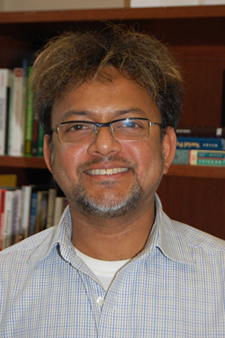 “I began to collaborate with Sister Cyril in 2001,” said Chattopadhay, who came to Notre Dame last year and maintains friendships with the nun and her Loreto teachers. “She is leading a remarkable social experiment in education that unites children from all social, financial and religious backgrounds. Sister Cyril touches tens of thousands of children with her programs of outreach and partnership.”

The Notre Dame students spent four weeks examining Sister Cyril’s innovative educational and social justice interventions, which include weekly visits by Loreto students to village schools where they become the “teachers” for their counterparts in these schools, targeting the root causes of poverty and marginalization.

“We spent mornings and evenings helping Loreto’s Rainbow girls who once lived on the streets but now live on the upper floor of the school,” senior Emily Keebler said. “Naps and homework in multiple languages occurred simultaneously. In the late mornings we focused on our research.”

They examined relationship dynamics between Loreto’s 600 wealthy or middle-class students and 600 low-income kids from the city’s sprawling slums, motivation and aspirations of the Loreto students who tutor Rainbow kids, and the school’s cost-effective and innovative learning strategies.

“I really wanted my students to have a unique and powerful experience and they surpassed my expectations in every way,” Chattopadhay said. “They were warm, genuine, caring and engaged. They didn’t hesitate to hug the street kids who were probably not wearing the cleanest clothes and didn’t smell so pleasant. They did everything with a great spirit.”

Outreach included working with community organizations in Kolkata to experience a wide variety of social programs in diverse spatial contexts of the global city. They visited slum schools, toured prestigious English schools and questioned representatives from Catholic Relief Services and the U.S. consulate.

“Everywhere you turn there is another challenge that is blocking the idea of quality education for all,” said junior psychology major Carolyn Leary, who is planning a career in special education. “Dreams are limited by extreme poverty, societal expectations and government roadblocks, but I was inspired by Sister Cyril’s perseverance. For every hurdle, she has created an outreach program to address the issue and affected population.” 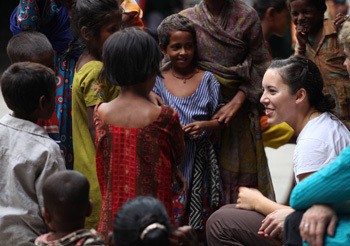 The Notre Dame students spent three days a week in Loreto schools, one day at an off-site organization, and another divided between reflective seminars and workshops with local educators and policy makers.

“Some of the visits were emotionally trying,” Keebler said. “Because the issues are so complex and the children so young, but we were fortunate to see an overall view of education in India.”

Sister Cyril has been honored for her work by UNESCO and the U.S. Conference of Catholic Bishops and has spoken before the United Nations and on The NewsHour with Jim Lehrer, among many others. And, although she often plays host to volunteers, interns and faculty researchers from around the world, this was the first time she has worked directly with students conducting research as part of a course.

The experiences all were new for the Notre Dame group.

“My problems were quickly shoved into perspective when I met girls who have been trafficked and who deal with issues that I cannot even imagine,” Leary said. “I admire their strength and am inspired by their hope.”

On campus this month, the students will submit their research papers and will participate in an undergraduate research panel in the spring. Chattopadhay is offering the course again for four weeks next summer.

The 2009 trip was supported by seed money from a Center for Social Concerns’ (CSC) community-based course development grant, and Rachel Tomas Morgan, director of the CSC’s International Summer Service Learning Program, provided technical support. Additional support for the course was provided by the College of Arts and Letters’ ESS minor; Kellogg Institute for International Studies; and Arts and Letters Office of Undergraduate and Post-Baccalaureate Fellowships.

Originally published at newsinfo.nd.edu on November 03, 2009.