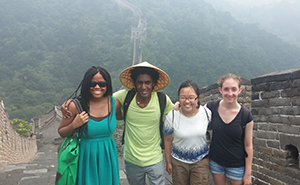 In summer 2015, more than 60 College of Arts and Letters students will participate in language and cultural immersion programs in 20 countries around the world, thanks to funding from Notre Dame’s Summer Language Abroad (SLA) Program.

“Study abroad is an invaluable experience for anyone looking to study a foreign language,” said junior Christopher Rhyne, a Chinese and psychology major who received an SLA grant to spend summer 2014 in Beijing. “The classroom textbook can only take you so far. When you’re abroad, you get a feel for the rhythm of the language.”

A program of the College’s Center for the Study of Languages and Cultures (CSLC), SLA offers grants of up to $5,500 for students to complete an intensive curriculum in their chosen country, coupled with real-life language use and structured opportunities for community engagement.

Through a community service program, Rhyne practiced his Chinese while talking with senior citizens in Beijing about their lives. These occasions, he said, were some of the most memorable of his trip.

“Going abroad not only improves your ability to speak the language, but also gives you exposure to the culture that could never be experienced otherwise,” he said. 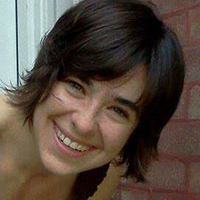 With funding from the SLA program, Heather DuBois, a third-year Ph.D. student in theology and peace studies, traveled to Central America to pursue fieldwork and improve her Spanish skills. The experience has enriched her research, she said, by allowing her to read primary sources and talk with research participants in their native language.

DuBois spent six weeks studying in Antigua and Lake Antitlan, Guatemala, and two weeks participating in peacebuilding training at an NGO called ALAS: Mesoamerican Peace Movement in El Salvador. Guatemala and El Salvador were of particular interest to her, she said, because of their histories of civil conflict and ongoing violence, but also because of the history of liberation theology found in Latin America.

“We went to visit some of the sights related to Oscar Romero in San Salvador,” she said, “and actually being there makes you feel so much more connected. I felt less like a bystander and more like someone who could be more intimately part of the conversation.”

DuBois, who came into the summer with no experience speaking Spanish, was admittedly overwhelmed when she first arrived in Guatemala. “By the end, however, I was able to understand pretty much everything people said to me once they knew I was a beginner.

By the time she traveled to El Salvador, DuBois realized just how much her Spanish had improved. “The majority of the training participants at ALAS were from Canada, and their Spanish skills were worse than mine. So, I acted as the translator for them. Can you imagine?”

DuBois’ progress in Spanish has already helped her in her research on the influence of Latin American liberation theology.

“You get to know people in a different way when you can connect to them in their native language, even if it’s not fluently. Just one summer gave me enough to banter a little, which allows people to feel comfortable—and that is really important to me in the way I try to approach my research.” 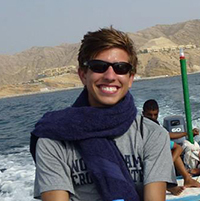 Senior philosophy and Arabic major Jacob Kildoo became interested in Arabic culture after he took a theology class on Islam at Notre Dame. His summer abroad in Muscat, Oman, he said, not only enhanced his language skills but also confirmed his desire to someday teach Arabic at the university level.

Kildoo said that the SLA grant was instrumental. “Honestly, I could not have afforded to go otherwise.”
One of the most valuable aspects of his summer abroad, he said, was the opportunity to learn and practice the colloquial side of the language, and not just the Modern Standard Arabic taught in his courses.

“I accomplished far more than I thought possible in the short time I was there,” he said. “Over the course of five weeks, I interacted with my Omani professors constantly in Arabic; I spoke Arabic in restaurants, barbershops, stores, taxis, and on the streets.

“The whole experience was truly a fantastic way to learn. I hope that I can continue to use intercultural experiences and foreign language acquisition to make myself a more well-rounded person.”