From Pythagoras’ golden ratio to fractal art produced with modern computers, mathematics and art have long been intertwined. Because of this, Shelley Kornatz, a senior graphic design major, sees no reason why an art student shouldn’t take up the cause for math with today’s high school students.

“I’ve always liked math,” Kornatz says. “My dad was a math major, and I ended up being good at it in school. I always hated it that my friends didn’t like math.”

Kornatz, under the guidance of faculty advisor Ingrid Hess, set out to create a senior thesis project that could show students that studying math is more than just memorizing formulas or untangling word problems; it can also be interesting, engaging, and relevant.

The Art of Research 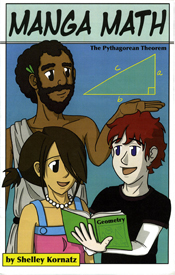 “Working with Shelley on her BFA thesis project was one of the highlights of my year,” says Hess. “I consider it an honor to be able to spend such quality one-on-one teaching time with a student so committed to creating work that will better the world.”

As part of this design project, Kornatz had to study both pedagogy and math theory. “I researched mathematicians and their various discoveries until I picked Pythagoras and the Pythagorean theorem,” Kornatz says. She then developed a script, which she sent to several math teachers who reviewed it along with their students. Once she gathered all the feedback, she could then begin to develop her design approach.

“I lived in Japan for three years because my father was in the Navy,” Kornatz says. “I read a lot of manga and realized the versatility that it has in Japan—from picture books for toddlers to instructional manuals for businesspeople.

“After moving back to the States,” she says, “I noticed the growing trend of Americans reading manga. Because of the rising popularity of this style among the same demographic targeted by my thesis, I decided to use manga as my medium.”

The word manga, literally meaning "whimsical pictures,” first came into common usage in the late 18th century with the publication of picture books by Japanese artists. It now refers to the Japanese version of the familiar American comic book. Manga exploded in popularity in the 1950s and also has influenced the development of anime, or Japanese-style animation.

A Design in Action

In Manga Math, Kornatz uses a modern-day high school storyline that helps students realize that math can be applied to their daily lives. She includes a biography of mathematician Pythagoras to help her readers understand how the theorem was developed and incorporates hidden practice problems throughout the book so that students can apply what they’ve read.

The book has already made an good impression on the faculty in Notre Dame’s Department of Art, Art History, and Design: Kornatz was honored with both the Radwan and Allan Riley Award for Design and the Efroymson Family Fund Emerging Artist Award at the 2010 BFA/MFA Candidates’ Theses Exhibition.

“Watching Shelley create a project that will help struggling students become excited about geometry reminded me of how important the thesis project is,” says Hess. “It can be an incredible opportunity for students and faculty to join forces to make a better world.”

Kornatz plans to distribute the comic books on www.lulu.com, a self-publishing website. But when asked if she plans to create more manga comics to engage students in math, Kornatz laughs. “It took me the whole year just to make this one!”

Of course, if there is enough interest, she adds, she is definitely willing to go back to her drawing board.