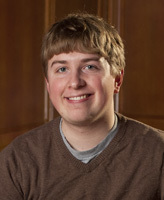 When tragedies strike, how do we recover? Last summer, senior psychology major Benjamin Pfeifer moved closer to an answer, thanks to a research grant from the Undergraduate Research Opportunity Program (UROP) in Notre Dame’s College of Arts and Letters.

Administered by the Institute for Scholarship in the Liberal Arts, UROP supports Arts and Letters students engaged in independent research or creative projects under the guidance of a faculty mentor.

For his UROP project, Pfeifer worked with Gerald Haeffel, an associate professor in the Department of Psychology, to study the effects tragedies have on depressive responses.

“The average person would probably feel sad after a tragedy but recover from it,” Pfeifer explains. “But there are some people who don’t; some people have enduring depressive response.”

In this particular project, Pfeifer focused on depressive responses after the death of Notre Dame student Declan Sullivan in 2010.

“The surprising finding was that it looked like people who didn’t know [Sullivan] got more depressed than people who did,” Pfeifer says.

He concluded that, because people who are not intimate with the victim of a tragedy do not have access to the same support groups that the victim’s friends and family do, they were more likely to remain depressed. “In some cases,” he says, “their feelings might have been invalidated: ‘You didn’t even know him, why does this bother you?’”

It’s thankfully rare for any given individual to have an enduring depressive response to a community tragedy like this, Pfeifer says. For those who do experience long-lasting depression, it’s because they have a combination of multiple risk factors, not just one, he adds. “Not knowing Declan well, and as a result possibly having your negative reactions to his death invalidated by others, was one of those factors.

“But only people who were in close proximity to the scene when the tragedy occurred, had a cognitive vulnerability to depression, and also didn’t know Declan well had reactions that were significantly more depressed than average two months after the tragedy occurred. So this study helped us to understand how a multitude of risk factors are involved in conferring risk for depressive reactions to tragedy.”

Pfeifer’s findings, Haeffel says, could help counselors “narrow down the potential pool of those needing services.”

Working closely with Haeffel, Pfeifer has continued to build on this theory and his research well beyond the initial UROP project, now turning it into his senior thesis. “He’s helped to give me the opportunity to perform at the same level as a first-year grad student,” Pfeifer says.

Working on such an intensive—and compelling—project also helped him realize that he wants to pursue research as a career, he says. Pfeifer recently accepted an offer to enroll in The Ohio State University’s clinical psychology Ph.D. program.

If you are interested in graduate school, Haeffel says, a “research resume” is a must.

“This is particularly true for clinical psychology Ph.D. programs, which are among the most difficult graduate programs to gain admittance to,” he says. “They are more difficult to get into than cognitive, social, and developmental psychology programs, as well as medical school and law school.”

“Ben has already presented three posters at national conferences, he was first author on a poster presented at last year’s Association for Psychological Sciences conference, and he just recently found out that he will be presenting yet another poster at this year’s APS conference in Washington, D.C.,” he says. “Ben was also able to write up his UROP project for publication and is first author on the submitted manuscript.

“In brief, Ben has put together an outstanding research resume as an undergraduate,” he says.

Pfeifer encourages fellow students who are considering a career in research to apply for a UROP grant—and not just for the resume advantages.

“Sometimes it’s hard to get a feeling for what studying at the graduate level would be like,” he says. “This is a way you do that—and it can lead you to some really exciting opportunities.”