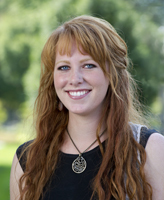 When Kathleen Bracke got the call, she dropped the phone out of shock, then picked it up and asked the caller to repeat the news. On the other end was a representative of the Princess Grace Foundation-USA announcing that Bracke had won a 2012 Princess Grace Award.

“They were giving me all this information and the whole time I was thinking is this a mistake?” says Bracke, a senior in the University of Notre Dame’s Department of Film, Television, and Theatre (FTT) and one of only two winners of this year’s Princess Grace Undergraduate Film Scholarship.

“It’s an international competition and student filmmakers from all of the top-ranked film departments apply,” says Jim Collins, professor and chair of FTT. “The fact that Kathleen won the award against that kind of competition is an indication of just how exceptional her project is.”

The narrative film Bracke proposed is nothing if not ambitious. Running about 25 minutes, it follows the story of Aoife, a young girl living on a remote island off Ireland’s western coast, a predominantly Irish-speaking region. “Aoife begins to notice images disappearing from a mural across from her school,” explains Bracke. The images, which represent various aspects of Irish culture, disappear from real life as well, she says.

Robin O’Brien, a senior in the Department of Art, Art History, and Design, will design and paint the mural that will serve as a centerpiece to the plot, and a crew of recent FTT graduates will help Bracke shoot her film on location in Ireland during winter break.

An Irish language and literature minor, Bracke wrote the entire script in Ireland’s native language and plans to cast Irish-speaking actors. The use of Irish, which many consider a dying language, fits the film’s theme of cultural loss, she says.

“It intrigues me what happens to a culture when part of it disappears—a song, a dance, an eating habit—whether something replaces it or whether there will always be that void, forever.”

Thanks to undergraduate research opportunities through the University’s Nanovic Institute for European Studies and Center for Undergraduate Scholarly Engagement (CUSE), Bracke had the opportunity to travel to Ireland several times in the last few years—and became captivated by the country and its vibrant culture.

“Notre Dame really provided me with the resources I needed to pursue what I love,” she says. “Undergraduate research at Notre Dame is absolutely amazing. There’s no other school that does it as well.”

Now, with funding from the Princess Grace Award, Bracke can delve deeper into the culture of Ireland and bring her perspectives to the rest of the world.

“I love cinematography because I communicate better visually than in words,” she says. “The goal of filmmaking is to let your audience into your view, so it’s really exhilarating to get behind the camera on this project and do that.”

Bracke’s senior thesis film will culminate four years of study and exploration in a diverse array of interests across Notre Dame’s College of Arts and Letters. Faculty in the Department of Irish Language and Literature sparked her interest in the idea of culture loss and have helped her ensure the linguistic integrity of the script, while mentors in FTT helped her develop as a filmmaker.

“The FTT program gives you opportunities that you wouldn’t expect and you wouldn’t get anywhere else because it has such a small ratio of teacher to students,” she says. “It’s all about experience, and the film program at Notre Dame really gives you that.”

Bracke’s is a success story that the entire College of Arts and Letters can take pride in, Collins says. “I’d love to be able to say that FTT is solely responsible for making Kathleen into a brilliant young filmmaker who is worthy of this recognition but the credit has to be shared,” he says. “It’s proof that the increasing emphasis placed on interdisciplinary, international study, and undergraduate research are all beginning to bear fruit.”

“I think Kathleen has enormous potential,” he adds, “because she combines a very refined visual sense with a fierce determination to see her projects realized. She brings so much to the table in terms of her cinematic, ethnographic, and linguistic skills. She’s going to be powerhouse to be reckoned with, no matter what she decides to do in her career.”

The award is a vote of confidence in Bracke’s ability and potential as a filmmaker, and a milestone for FTT as well. She is the department’s second Princess Grace Award recipient in three years. Javi Zubizarreta ’11 won in 2010 for his senior thesis film on Basque shepherds in Idaho.

“It’s obviously very significant for another FTT major to win a Princess Grace Award in such a short time span,” Collins says. “Our goal is to produce smart, sophisticated filmmakers who have the skills—and the courage—to embark on ambitious projects that will make an impact. These awards are irrefutable evidence that our work is being recognized by a very prestigious institution.”

The PGF-USA, a public charity, was formed after the death of Princess Grace in 1982. Its awards for theater, dance and choreography, and film continue the legacy of Princess Grace (Kelly) of Monaco, who helped emerging artists pursue their artistic goals during her lifetime.

Bracke and the other 2012 honorees in theatre, dance, and film will be honored in New York City in October at the annual black-tie Princess Grace Awards Gala, held in the presence of the current Prince and Princess of Monaco.