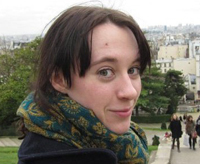 Anna O’Meara, a senior art history major at the University of Notre Dame, has been invited to present her paper, “Cinema against Cinema: Imagery in the Films of Guy Debord,” at the 2012 National Conference on Undergraduate Research (NCUR) later this month. Her paper was selected from among more than 3,500 submissions.

Established in 1987, NCUR promotes undergraduate research, scholarship, and creative activity in all fields of study. This year’s conference will be held March 29-31 at Webster State University in Utah.

“When I got selected, I was totally amazed,” says O’Meara, whose trip is supported by grants from the Nanovic Institute for European Studies and the Undergraduate Research Opportunity Program in the College of Arts and Letters’ Institute for Scholarship in the Liberal Arts.

“There’s not really a priority on studying French avant-garde in the United States,” she says, “and I’m writing an art history thesis on a film that has no images.”

O’Meara will present her senior thesis research on French writer and filmmaker Debord’s 1952 film Hurlements en faveur de Sade (Howls for Sade), which not only has no images but also ends with 24 minutes of silence.

“It was inspired by avant-gardists who wanted to destroy cinema, so I’m talking about how the destruction of cinema and the avant-garde relates to political ideologies, particularly Marxist ones,” she says. “My primary focus is on having a film without any images: It transitions between screens of white and screens of black, and there’s a script that goes along with the white screens. Debord says he was inspired by a lightning strike.”

“Her paper stands out for the imaginative power of its interpretations and for the meticulous research that anchors those interpretations in a vividly portrayed cultural context,” she says. “O’Meara considers the brilliant, iconoclastic philosopher Guy Debord in a new light—as _auteur_—and reads his remarkable films as works of art.”

The conference will be an invaluable experience for O’Meara as a young scholar, Gopinath adds.

“Publicly presenting research to an audience composed of other scholars makes it possible to benefit from their reactions and perspectives,” she says. “For emerging scholars in particular, conferences also provide opportunities to forge professional contacts.”

O’Meara says she discovered Debord during Theories of Art, a course taught by Kathleen Pyne, a professor in the College’s Department of Art, Art History, and Design.

“We were reading an article by [Michael Foucault], and he mentioned Debord, because he was a major inspiration for French thinkers. Just the way he paraphrased what Debord thought about—what he calls ‘spectacular society,’ or the influence of the media on modern life—really influenced me to look into it more,” she says.

“I wrote a term paper on it, then another term paper on it, and then ended up writing my thesis on it,” she says. “A lot of people have argued that it’s the strangeness that makes the film stand out, but I like to believe that’s not true. There’s something about the extremity of the art I’m working with that makes it interesting. I think attempting to analyze something that doesn’t want to be analyzed in and of itself is intriguing.”

O’Meara says she plans to continue studying Debord next year as she enters Notre Dame’s graduate program in art history. “I’m writing a master’s thesis next year where I plan to talk about more of his films.”