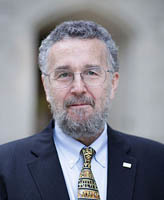 The John J. Reilly Center for Science, Technology, and Values focuses on three broad areas in support of its mission: education, research and outreach, says Don A. Howard, center director and professor of philosophy.

The Reilly Center, established in 1985, is named for the father of alumnus Jack Reilly ’63, ’64. Reilly, whose gift created the initial endowment for the center, is a graduate of the Arts and Letters/Engineering dual degree program.

Education: The center’s first academic initiative, an undergraduate minor in science, technology, and values, was launched in 1986 with a three-year startup grant from the National Endowment for the Humanities. Today the center is home to three different academic programs.

The History and Philosophy of Science Ph.D. program is a unique interdepartmental doctoral program that prepares students for a wide range of professions, from academia to science journalism or positions in museums, libraries and publishing.

The Arts and Letters/Engineering dual-degree program is a five-year course of study that combines professional training in engineering with a rich experience of humanistic, artistic, and social-scientific perspectives.

Research: The center hosts a rapidly growing array of research partnerships with technical units on campus, including the Environmental Change Initiative, NDNano, Advanced Diagnostics and Therapeutics, the Wireless Institute and the Eck Global Health Initiative.

“We have our own research initiatives,” Howard notes. “Foremost among them, ETNSI, Emerging Technologies of National Security and Intelligence, informally called weapons ethics. Work is being done on topics from drones to soldier bio-enhancement to cyber conflict and autonomous systems that let the machine make the call.”

Outreach, says Howard, takes many forms. The center has a cadre of 50 Reilly Fellows across campus, faculty members “who through their teaching and research have evinced a strong commitment to looking at the social, ethical, and legal impact of science and technology.”

An online publication, the Reilly Center Reports, is a vehicle for making the work of the center accessible to policy makers, science journalists and the educated scientific laity—the non-specialist.

The point, says Howard, is to make accessible to the public the best thinking and information on a wide array of questions about how science and technology affect human affairs.

The center is also moving into social media with the launch of a Facebook page focusing on events and discussions, facebook.com/NDReillyCenter.

It’s recently been announced that the center will be the new home for annual meetings of the International Society for Military Ethics, beginning in 2013; the center also conducts outreach locally as sponsor of the Northern Indiana Regional Science and Engineering Fair.

The center has experienced rapid growth, says Howard, “and we’re still looking at what our role will be. We want to be a partner with technical faculty, to help them talk about social, ethical, legal, and policy implications of science and technology. We also want to take our voice off-campus, and be more than a campus leader—we want to be a national and international leader.”