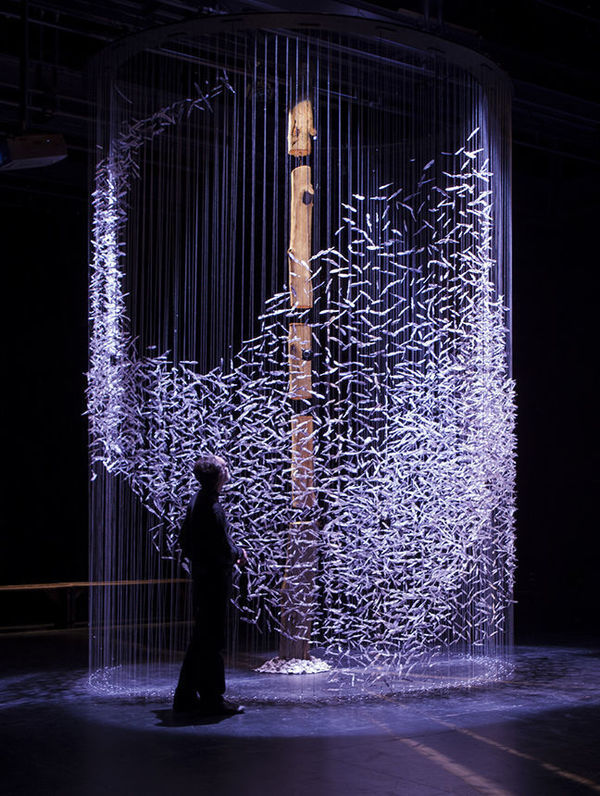 Art installation for “I Was Born for This.” Click for larger image.

Joan of Arc, leader of armies, adviser to King Charles VII, and patron saint of France, has been a role model to those who suffer for their convictions for more than 600 years.

In particular, said Sacred Music at Notre Dame Professor Carmen-Helena Téllez, she inspires those who “break new ground, assert new ways to view the world, or occupy a disenfranchised position in society.”

In the first of a series of sacred music dramas produced at the University of Notre Dame, Joan of Arc also served as inspiration for an interdisciplinary project featuring elements of film, music, and a multi-media art installation.

Sacred Music at Notre Dame was awarded a grant from the Andrew W. Mellon Foundation in 2012 to develop sacred music dramas, which are conceived broadly as opportunities to reflect on important issues in culture and society through a dynamic interaction of the humanities and the arts.

Under the artistic direction of Téllez, the dramas may be triggered by a preexisting artwork, a new commission, or by current issues. However, each will include original artistic aspects and an element of audience participation.

“The point of a sacred music drama is to live an idea and a value through some sort of immersive and interactive participation,” Téllez said, “which is a completely different kind of experience than attending a lecture or even a concert.” 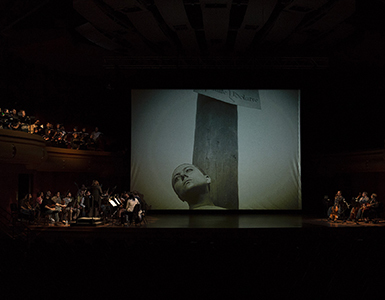 The concept for this first sacred music drama began with the 1928 silent film The Passion of Joan of Arc by C. T. Dreyer. Considered one of the greatest films of all time, Dreyer’s work also inspired the oratorio Voices of Light by American composer Richard Einhorn in 1994.

“In the last few years, the oratorio has been adopted as a live soundtrack for the film,” said Téllez. “I thought that the process of creating a new work inspired by a preexisting work, which I call ‘nesting,’ could be utilized in a similar fashion to generate a third work of art specifically for our Notre Dame community.

“We chose to create an inter-artistic installation, which we called ‘I Was Born for This,’ after words Joan said when asked about her mission.”

Donald Crafton, the Joseph and Elizabeth Robbie Professor of Film, Television, and Theatre, and Daniel Hobbins, associate professor in the Department of History, were among the artists and scholars involved in the project. All of the collaborators were particularly taken with a moment in the film when Joan, moments from dying at the stake, sees birds rustling and flying away to the clouds.

“We all thought the birds represented the moment of liberation,” Téllez said, “but also a moment when her example would fly forward into history.”

The scene became the trigger for the installation. Artists Gwendolyn Terry and Charlie Simokaitis included a tree, a cloud of bird feathers, and images of Joan from the film as construction elements. Sound artist Christopher Preissing then collected quotes by and about Joan of Arc and recorded Notre Dame students reading them in French, English, and Latin to create a “cloud of voices” in the space, reminiscent of the voices that spoke to Joan. A lighting sequence by student Jake Reily allowed various shadows and beams of light to project through the space, a metaphor for the changing perceptions of Joan of Arc.

“The installation was intended as a place of reflection, but also consolation,” Téllez said, “because the film is harrowing in its intensity. We wanted the installation to project a sense of peace and spiritual realization.” 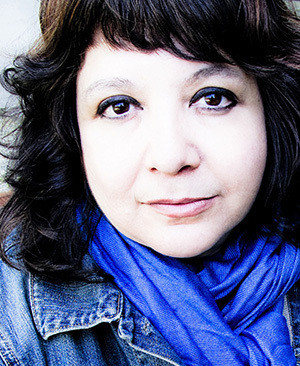 The final element in the installation was provided by the audience. The event began with a screening of Dreyer’s film and accompanying performance of Voices of Light by the Notre Dame Festival Chorus and Orchestra. Afterward, audience members were invited to walk through the installation and write their responses to the implied question, “What were you born for?” on the tree at its center. They were also encouraged to take a small “token of memory” — created by clay artist Jay Strommen — from beneath the tree.

The overall impact of the sacred music drama was “powerful and deeply moving,” said Michael Altenburger, a Ph.D. in theology student who attended the event. “It’s wonderful that we have opportunities at Notre Dame to see performances like this.”

The success of the project, Téllez said, is thanks to the collaborative effort of the Notre Dame faculty, students, and guest artists involved.

Looking forward, she said that members of the Notre Dame community will be invited to propose the topic and the format of the next sacred music drama project.

“We look forward to sending the announcement soon and receiving many proposals.”