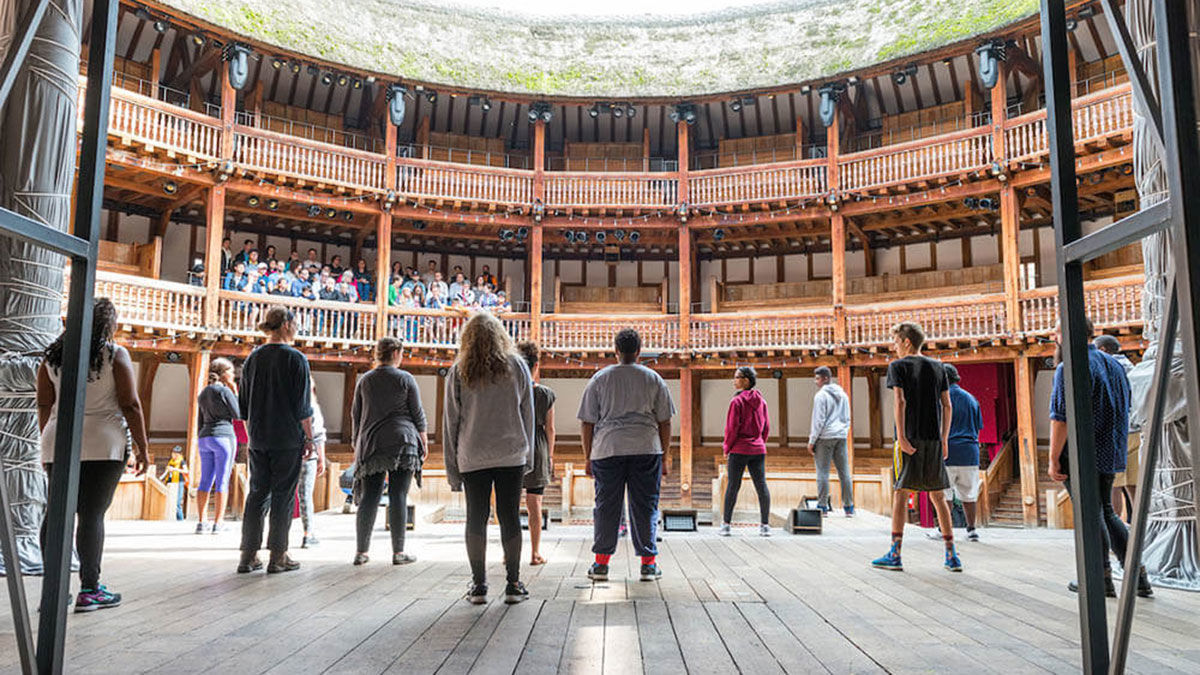 The Robinson Shakespeare Company members take a class at the Globe Theatre in London.

The University of Notre Dame’s Robinson Community Learning Center hosted a celebration Thursday, October 26, commemorating the Robinson Shakespeare Company’s summer trip to England where members had the opportunity to study the renowned playwright and his works in his place of birth.

Fourteen RSC youth, ages 12 to 18, traveled to the country with RCLC staff and AmeriCorps members from July 26 to August 4 to study and perform Shakespeare in Stratford-Upon-Avon and London at the invitation of the Shakespeare Birthplace Trust and Globe Theatre, respectively.

The youth — representing a diverse range of students from the South Bend area — performed Shakespeare’s Cymbeline in the Great Garden of Shakespeare’s New Place; toured London’s Globe Theatre; took a movement workshop on the stage of the Globe; led a discussion with Globe staff about engaging diverse youth with Shakespeare; and saw four professionally produced Shakespeare plays.

The troupe was the first to perform in the Great Garden, which opened in 2016 on the grounds of Shakespeare’s former estate. The poster promoting the performance, adorned with photos of each of the cast members, is now part of the Shakespeare Birthplace Trust’s archives — representing the world’s largest collection of Shakespeare-related material accessible to the public.

The celebration featured a performance of a scene from Cymbeline, presentations by RSC youth and two videos — an 8-minute documentary about the trip for Notre Dame Magazine and a shorter “What Would You Fight For?” segment that debuted at halftime of the Notre Dame vs. Temple University football game.

In addition, Canon Solutions America presented RSC members, families, and supporters with a book of photos from the trip, including some taken by the youth themselves with cameras provided by Canon.

Tears flowed as RSC members and staff offered heartfelt thanks to the many individuals and organizations that made the trip possible — notably Christy Burgess, Shakespeare program director, and Velshonna Luckey, youth development program director, who oversee the company.

“I always joke that we are a scrappy Shakespeare company with heart, and I don’t know how you can’t get emotional watching the journey of these kids grow and develop into these amazing people,” Burgess said.

She recalled with pride watching the youth share insights about Shakespeare with a leading expert from Shakespeare Birthplace Trust.

“These kids get made fun of sometimes for liking Shakespeare, for having this be their thing, and they are constantly justifying why they love Shakespeare to other people,” she said. “But now here they are talking to one of the world’s leading Shakespeare academics and just having a chat like it’s nothing, like it’s second nature.”

Addressing the youth directly, she said, “Thank you for being the best students I could ever ask for. I love you.”

Added Luckey, “The world has taken notice of the great work that you did.”

For the youth, the experience was as much about the trip itself — the opportunity to explore the world outside of South Bend with close friends — as it was about Shakespeare.

“The moments I had with these people and the friendships we made, the seeming impossibility of being where we were, of being who we were, and being that together, it was magical,” Ophelia Emmons said.

“London was … wow,” castmate Joshua Crudup said. “You should have seen us on the bus coming into London; everyone was shouting. It was amazing.”

He added, “It’s mind blowing. That a Shakespeare company from South Bend, Indiana, would go to London, go where Shakespeare lived, where he worked, where he performed, and make history, is just amazing.”

Parents enjoyed the celebration as well.

“It was great; it made me a little misty eyed,” said Rich Wallace, father of cast member Forest Wallace. “It was great to see them in England again (in the videos) and see their reaction.”

As for what’s next, Burgess noted that the Shakespeare Birthplace Trust has invited the company back to Stratford-Upon-Avon.

“They want us to make this a trip every two years, and I think that that is something that’s really exciting to aspire to,” she said.

Founded in 2008, the Robinson Shakespeare Company offers high-quality theater instruction to South Bend area youth from diverse backgrounds. Members compete in the Shakespeare at Notre Dame English Speaking Union Monologue Competition in the fall and perform full productions of Shakespeare’s works in the spring and at the end of a five-week Shakespeare Summer Camp.

The company also does outreach into area schools, reaching hundreds of students through weekly after-school programs and in-class workshops.