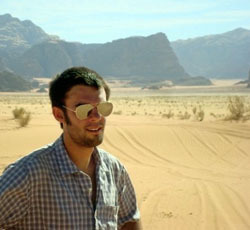 During the months he lived in Egypt, Glen Water saw poverty with his own eyes—and glimpsed a vision of the sustainable development that can alleviate it. He interviewed energy experts and became familiar with the fundamentals of engineering and irrigation. And he considered how investing in alternative energy might prevent regional conflicts.

Not a bad way to spend the second semester of his junior year.

Water, who graduated in 2009 from Notre Dame with a bachelor’s degree in political science, studied in Cairo for a semester thanks to a grant from the College of Arts and Letters’ Undergraduate Research Opportunity Program.

He is among the latest students to benefit from such grants, which are administered by the College’s Institute for Scholarship in the Liberal Arts. The institute provided more than $100,000 to support the research of 74 students during the 2008-2009 academic year, and another $105,000 to fund the work of 37 students during the summer of 2009.

Water, who minored in three areas—public policy, peace studies, and Middle Eastern studies—says his grant allowed him to pursue multiple interests while conducting high-impact research. “I started looking into green development in Egypt, which is just starting to take off,” he says. “The research really was hands-on.”

That research began with a simple enough problem. Because Cairo suffers from overcrowding, Water says, the Egyptian government wants to help more people move into what is now desert. The challenge: flood irrigation won’t work because the water would simply evaporate.

Instead, workers must use sprinklers to water the desert, opening the door to a green technology: solar-powered sprinklers. Water studied the feasibility of this technology, learning that the primary expense comes with start-up, not maintenance costs.

Solving the problem of sustainable development is crucial for the region, Water says. Otherwise, Egypt, Ethiopia, and Sudan are poised for conflict because each country uses the Nile River for its water supply, and each is now at capacity and planning to use more.

“This was pressing. I was doing something that would make a difference,” says Water, who distilled his research findings into a paper, “Solar Power and Resource Wars,” which he presented in October 2008 during Notre Dame’s Symposium of Undergraduate Research on Green Energy. “If it worked, maybe I could do something to help prevent a war.”

Agustin Fuentes, professor of anthropology and the director of ISLA, says Water’s experience exemplifies how students can benefit from the UROP grants and take an increasingly active role in their own learning.

“The vision behind these grants, the goal, is to move students from receiving knowledge to creating and owning knowledge,” he says. “The experience also gives them a sense of participation and accomplishment. It’s their questions, their research, and their products.”

In addition to providing a valuable learning experience, Fuentes says, conducting this sort of independent, interdisciplinary research helps students build transferable skills that will serve them well after graduation.

“The skill set one develops to conduct rigorous research can apply in everything from graduate school to running corporations to teaching in the inner cities,” he says. “It’s independent thinking, innovation, and intellectual challenge.”

Water, who is now teaching 11th and 12th grade social studies in Hawaii with Teach for America, says his research experience still influences him as he considers his future career options. He plans to pursue a graduate degree in security studies, Middle Eastern studies, or law. Meanwhile, he encourages other students to take advantage of UROP and pursue their intellectual passions.

“The UROP grant gives you the ability to really do what you want,” he says. “I was interested in security issues and green development, and I was lucky enough to have the opportunity to combine them. This experience is completely self-directed, and you can really take it as far as you want.”