Molly Lipscomb, assistant professor of economics at the University of Notre Dame’s College of Arts and Letters, and Laura Schechter and Jean-François Houde, economists at the University of Wisconsin, Madison, hope to increase the accessibility of sanitation technology in poor African neighborhoods. Their two-year research project aims to make sanitation services more environmentally friendly and improve the health of neighborhood residents in Dakar, Senegal.

The project is supported by a more than $1 million grant to Innovations for Poverty Action (IPA) from the Bill and Melinda Gates Foundation.

Lipscomb, an environmental and development economist who is a faculty fellow at Notre Dame’s Kellogg Institute for International Studies, credits a $15,000 seed grant from the Institute’s Ford Family Program in Human Development Studies and Solidarity with helping to lay the groundwork for the new, larger study. 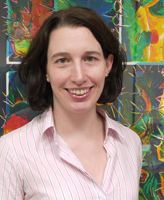 “The pilot study funded in 2009 by the Ford Program helped us understand many of the issues in the field,” she says. “We were looking at the impact of social pressure on people’s willingness to pay for sanitation services.”

In both projects, the economic problem is similar: how to incentivize the proper disposal of waste, either through social effects or through reducing the costs of disposal services. The pilot project analyzed willingness to pay for the disposal of gray water while the new project investigates the disposal of sludge from latrines.

“Sanitation is one of the biggest health concerns in high-density poor communities in developing countries,” says Lipscomb in describing the new, scaled-up project. Because proper disposal technology and services cost householders money, many dump latrine waste in the streets or pay manual laborers to remove the sludge, which they usually dump illegally near people’s homes.

With the new funding, the researchers are conducting three randomized controlled trials, which will cover 4,000 households in 400 poor neighborhoods of Dakar.

One trial will pinpoint ways to increase household investment in sanitation through social effects such as altruism, social pressure, or learning from neighbors. The other two will explore how to reduce the market power of mechanized sludge removal firms, as anti-competitive practices keep prices high.

To carry out the study, the collaborators are partnering with CREPA, a West African NGO that specializes in research on sanitation, and working closely with ONAS, the National Office for Sanitation of Senegal.

Project results are expected to inform marketing and operational work in sanitation in Dakar, as well as in other parts of Senegal and the developing world.

Innovations for Poverty Action is a nonprofit dedicated to discovering what works to help the world’s poor. The organization designs and evaluates programs in real contexts with real people, and provides hands-on assistance to bring successful programs to scale.