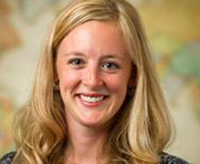 Laura Miller is part of an international team of psychologists seeking to design effective treatments for children and adults who suffered trauma in the wake of the Arab Spring, the wave of demonstrations, protests, and civil wars that swept the Middle East beginning in December 2010.

Miller is an assistant professor in Notre Dame’s Department of Psychology and Kroc Institute for International Peace Studies. Along with four other psychologists from the United States and Egypt, she is working to identify the clinical needs of the region by studying the psychological underpinnings of the Arab Spring and its impact on the mental health of people and communities.

“The premier interventions for those experiencing post-traumatic stress disorder frequently involve between 16 and 20 individual sessions with a professionally trained therapist,” Miller says. “But in many post-conflict settings, this isn’t realistic.”

Such interventions can be particularly difficult to facilitate for children who have been orphaned or separated from loved ones, Miller says, since they may have fewer caregivers to ensure they receive regular treatment. Often psychological intervention falls to international aid organizations, which can be ill-equipped to provide such services, Miller says.

“Some aid groups with the best of intentions may use treatment methods that have little foundation in psychological or mental health research,” she says. “Some of these treatments can cause psychological harm.” Little research exists on psychological interventions that can be effectively used by aid groups in conflict and post-conflict settings, Miller adds.

To develop appropriate treatments, Miller plans to link theory in cognitive, clinical, and developmental psychology to a discussion of the most recent upsurge of violence in Egypt. She then will identify cultural strengths in the Middle East that may be used to leverage culturally sensitive psychological interventions.

“The Arab Spring is a movement with critical implications for peace,” Miller says. “To date, very little research on this movement has been conducted by psychologists. I’m optimistic that the theoretical lenses of psychology can make an important contribution to peace and justice.”

Miller and her colleagues will present their findings at the symposium, “Arab Spring: A Psychosocial Perspective,” at the Annual Convention of the American Psychological Association in August 2014 in Washington, D.C.

Laura Miller joined the faculty of the Kroc Institute and the College of Arts and Letters in August 2013. She earned a Ph.D. in psychology from the University of Michigan and holds a bachelor’s degree in psychology from Notre Dame.