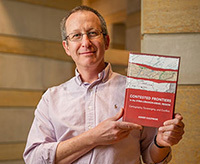 University of Notre Dame Associate Professor Asher Kaufman’s latest book was born out of a coincidence. A research trip in 2001 for his previous book, Reviving Phoenicia, led the historian to diplomatic archives in Nantes, France, where he stumbled upon what he described as “an archival bonanza”: a disorganized collection of documents, sketches, and maps that told the convoluted story of the roots of a decades-long border dispute between Israel, Lebanon and Syria.

The discovery eventually led to a new book, Contested Frontiers in the Syria-Lebanon-Israel Region: Cartography, Sovereignty and Conflict, recently published by the Woodrow Wilson Center Press in association with Johns Hopkins University Press.

After he found the archives, Kaufman said his research trajectory grew closer to focusing on the borders of Israel, Lebanon, and Syria, the borderland regions and their populations. “Political borders have always attracted the attention of social scientists, yet they have largely escaped the attention of historians of the Middle East,” Kaufman said. “Despite a perception that globalization has rendered borders irrelevant, they’re still extremely important to the people of this region.”

Contested Frontiers focuses on a 100-square-kilometer region where Syria, Lebanon, and Israel converge but where the border has never been clearly marked. Though small, the tri-border region holds immense symbolic and strategic importance, Kaufman said, as the site of vital passageways between countries, the second-highest mountain peak — Mount Hermon — in the Middle East, and one of the most important sources of fresh water — the Jordan River — in the region. It has been the site of Palestinian guerrilla warfare and Hezbollah confrontations with Israel, and home to rural villagers who live in one country but identify as belonging to another.

Kaufman’s examination of the region’s contested borders illustrates the complexity of the conflict and sheds light on larger issues. “Questions of sovereignty are not that clear, but this micro-case provides macro-lessons on the dynamics of the Israeli-Arab conflict, dynamics between Arab states and the colonial legacy in the Middle East,” he said. “The book looks at all of these issues, using cartography as a foundation.”

Contested Frontiers “examines the connections and links that complicate the problem of the tri-border region between Lebanon, Syria, and Israel in a sensitive and sympathetic manner,” said Nadim Shehadi of Chatham House, the London-based policy institute. “Moreover, the work manages to explain a complex technical and factual problem in a straightforward manner.”

“Kaufman has knitted together maps, archives, and other sources to give a comprehensive view of a collection of issues (fuzzy borders, water resources, state sovereignty, and non-state actors) in a complicated little corner of the Levant that has not hitherto received serious academic treatment,” said William Harris, author of The Levant: A Fractured Mosaic. “Given that this little corner is crucial to the future of relations among the three states, the author has done a major service in offering a rigorous, balanced, detailed, and fascinating interpretation."

Kaufman is associate professor of history and peace studies and director of doctoral studies at the Kroc Institute for International Peace Studies. Prior to joining the Notre Dame faculty in 2005, he taught at the Hebrew University, Jerusalem. He was a fellow at the Woodrow Wilson Center from 2009-10.