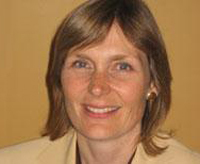 Sandra M. Gustafson, professor of English and concurrent professor of American Studies at the University of Notre Dame, has been awarded a prestigious National Endowment for the Humanities (NEH) fellowship to write a book on conflict and democracy in classic American novels.

The new book will analyze major conflicts in American history, including the current “culture of conflict” in the U.S. It also will explore the quest to resolve conflicts democratically—as portrayed in the work of writers ranging from James Fenimore Cooper, who published his first frontier fiction in the 1820s, to contemporary novelist Leslie Marmon Silko.

The book will draw heavily on the fields of peace studies and conflict transformation, says Gustafson, who has been a faculty fellow at Notre Dame’s Kroc Institute for International Peace Studies since 2010.

The NEH proposal originated in a course she taught in fall 2011, Conflict and Democracy in Classic American Fiction, offered by the Department of English and by peace studies. She credits Kroc faculty members David Cortright (author of Peace: A History of Movements and Ideas) and John Paul Lederach (author of The Moral Imagination: The Art and Soul of Building Peace) as significant influences on her new project.

Gustafson is the author of several books on American literature and culture. This is her second NEH grant; the first (2002-3) was for Imagining Deliberative Democracy in the Early American Republic (Chicago, 2011).

Deborah Tor was awarded an NEH grant for “The Great Seljuq Sultantate and the Formation of Islamic Civilization, 1040-1194.” An assistant professor in the Department of History, Tor specializes in the political, social, religious, and military history of the medieval Middle East and Central Asia, from the rise of Islam until the 13th century.

Stephen Dumont, a professor in the Department of Philosophy, will use his award to work on a project titled “The Two Affections of the Will: From Anselm of Canterbury to John Duns Scotus,” which will examine the development of the concept of free will in the late medieval period. For the past two years, Dumont has also been a member of the NEH Collaborative Grant at Notre Dame to edit the Parisian works of Duns Scotus.