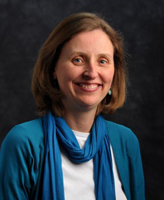 The American Council of Learned Societies has awarded a 2013 fellowship to Katherine Brading, William J. and Dorothy K. O’Neill Collegiate Professor of Philosophy in Notre Dame’s College of Arts and Letters and director of the History and Philosophy of Science (HPS) graduate program in the University’s Reilly Center for Science, Technology, and Values.

Brading received the ACLS fellowship for a research project called “Theoretical Physics as a Contribution of Philosophy,” which features Sir Isaac Newton, one of the most influential scientists of all time, as its central figure.

“Not many philosophers read Newton these days, and I think that’s a mistake,” Brading says.

“Part of what I want to do is to demonstrate the depth and range of Newton’s philosophical engagement and the novelty of his solutions. Then, by following his proposals through into contemporary philosophy and physics, I want to show how important they are—and help re-integrate Newton into the history of philosophy as we tell it today.”

Newton has a strong presence in Brading’s classroom instruction as well as her research. Brading mainly teaches philosophy of physics, both to undergraduates and graduates, and last semester taught a course on 17th century cosmology which culminates with Newton. This semester, she is teaching a graduate seminar, Historical and Conceptual Foundations of Space-Time Theory, which began with Descartes and Newton.

“I’m interested in the ways in which physics engages with some of our oldest and deepest philosophical questions about what the world’s made of and how it works,” she says. “This is important not just for contemporary philosophy but also because how we make sense of ourselves and the world around us today depends on how we tell ourselves our history—social, cultural, intellectual, and so on.

Brading was one of four faculty members from the College of Arts and Letters to win ACLS awards this year. She is joined by Catherine Cangany in the Department of History for “An Empire of Fakes: Counterfeit Goods in Eighteenth-Century America,” David Hernandez in the Department of Classics for “Butrint Archaeological Research Project: The Roman Forum,” and Xiaoshan Yang in the Department of East Asian Languages and Cultures for “Wang Anshi and the Song Poetic Sensibility.”

ACLS received 1,121 applications this year, from which only 65 award winners were selected, according to Ken Garcia, associate director of the College’s Institute for Scholarship in the Liberal Arts.

“This project has been brewing for a very long time, but it’s the kind of thing where I needed more than a few hours here and there to continue moving it forward,” Brading says. “Being able to have concentrated research time makes all the difference. I’m grateful and excited.”

In addition to her Newton research project, Brading has published works on Hilbert and the early history of Einstein’s general theory of relativity, as well as on structuralist approaches to physics and symmetries in physics.

“Kepler had this amazing theory that the structure underlying the Copernican system and responsible for the distances between the planets was a set of regular solids nested inside one another,” she says. “We’ve built his model of the cosmos in the DVT, complete with all the nested solids, and we get to fly around it. We’ve also replicated observations that Galileo made, and we’re building Tycho Brahe’s instruments in there, and so on.

“This project came out of my cosmology undergraduate class, and there’s a bunch of us working on it. It’s a lot of fun, and we like sharing these materials whenever we get the chance.”