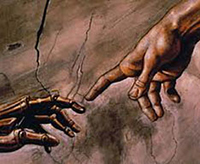 As a new year approaches, the University of Notre Dame’s John J. Reilly Center for Science, Technology, and Values has released its annual list of emerging ethical dilemmas and policy issues in science and technology for 2014.

The center generates its annual list of emerging ethical dilemmas and policy issues in science and technology with the help of Reilly fellows, other Notre Dame experts, and friends of the center.

The center aimed to present a list of items for scientists and laypeople alike to consider in the coming months and years as new technologies develop. It will feature one of these issues on its website each month in 2014, giving readers more information, questions to ask, and resources to consult.

The National Institute of Justice defines predictive policing as “taking data from disparate sources, analyzing them, and then using the results to anticipate, prevent, and respond more effectively to future crime.” Some of these disparate sources include crime maps, traffic camera data, other surveillance footage, and social media network analysis. But at what point does the possibility of a crime require intervention? Should someone be punished for a crime they are likely to commit, based on these sources? Are police required to inform potential victims? How far in advance can crimes be forecasted?

The company Backyard Brains will release a kit by the end of 2013 called “Robo Roach” that allows users to “briefly wirelessly control the left/right movement of a cockroach by microstimulation of the antenna nerves.” Claiming that their Robo Roach is “a great way to learn about neural microstimulation, learning and electronics,” buyers are encouraged to anesthetize and perform surgery on an adult cockroach so electrodes can be glued onto, and grounding wire inserted into, the thorax. The kit is currently sold for $99, is backed by the National Institute of Mental Health, and is marketed as an educational product. It’s legal to kill a cockroach—so at what point does treatment become unethical? Does turning animals into cyborgs treat animals as “toys” or give people a new appreciation for their complexity (as Backyard Brains claims)?

From locating lost children to keeping financial data and medical records handy, people are about to see a surge in data chip implants. Able to transmit and store data, chips will soon enable people to verify their identities, see if their children have traversed the boundaries (or “hopped the geofences”) set for them, give paramedics and doctors immediate access to their medical records, allow people to go wallet-free as they pay for groceries via a handswipe, or even store educational and employment data for a job interview. But what if the police can use it to track how fast someone is driving or monitor a person’s whereabouts? Can these implants become a mandatory form of ID? How do people protect their privacy from hackers? Can this data be sold to law enforcement or other companies? Does the good outweigh the bad?

So-called “sexbots” have been manufactured since 2010, when engineer Douglas Hines developed a gynoid bot named “Roxxxy” for the company True Companion. Although no sexbots have been sold yet (either by True Companion or any other company), the infrastructure (and presumably the technology) exists to create a robot with synthetic skin and artificial intelligence capable of learning owners’ preferences. Perhaps the most interesting part of the “sexbot” phenomenon is that bot prototypes are not limited to sexual uses, but designed to express love and affection and develop a vocabulary suited to the buyer’s interests. Obvious issues that accompany the introduction of such robots include changing norms and values in human interaction; the possible formation of social bonds or exclusive sexual relationships with robots; sex addiction; transference of expectations from robot relationships to human relationships (including issues of dominance, behavioral expectations, and consent); the further commodification of sex; and attachment issues.

Bitcoins are currently the most popular form of virtual currency. According to its website, Bitcoin is a low-cost way for people to exchange money online, without the interference of banks or any centralized authority. Bitcoins are produced online and can be purchased by anyone. Online business can accept bitcoins as payment or the coins can be converted into dollars, euros, or other currencies. The value of bitcoins is stored in a heavily encrypted online wallet, from which anyone can send and receive the currency. However, at the moment, bitcoin is still considered a high-risk investment as the price/value of the coins is not regulated and can fluctuate wildly over short periods of time. While the makers of Bitcoin see it as a revolution of the global economy, there are dozens of ethical and policy issues surrounding this new currency, including how to tax it, money laundering, the purchase of illegal goods, and hacking into bitcoin wallets. The anonymous nature of bitcoin activity makes transactions very difficult to track.

“Smart pills”— stimulants like Ritalin and Adderall—are now old tech. Non-invasive brain stimulation techniques, such as transcranial magnetic stimulation, which uses the principles of electromagnetic induction to focus currents in the brain, are now commercially available for non-medical improvement (such as memory and cognition boosting). Brain stimulation devices are most commonly used in treatment for various neurological and behavioral conditions, but the same technology can be used to enhance the human brain beyond its natural abilities. So far, research shows these techniques to be low-risk. Neurostimulation can be used to boost motor function, improve memory, and even modify behavior. But should it? And at what point is the line crossed? Do people have a responsibility to be the best humans they can be?

Geoengineering is the deliberate large-scale manipulation of environmental processes to combat global warming. It involves two types of processes—carbon dioxide removal and solar radiation management (SRM). SRM, the more controversial prospect, is a form of climate modification that reduces the amount of sun hitting the earth’s surface. Sulfate Aerosol Geoengineering (SAG-SRM) would inject the stratosphere with aerosols and could be done at such a reasonable cost ($8 million per year) that it’s possible one nation could take action for the entire planet. Whether used locally or globally, adopting a SAG policy would have long-term and far-reaching consequences. One nation’s policy decision could immediately and adversely affect another country’s economic well-being as well as affect human health over both the short and long term. Calls for environmental justice and adopting ethical guidelines have been raised.

Private companies are reinvigorating human space travel, and in return, at least one company seeks rights to mine the moon. Why stop with the moon when there’s the possibility of mining planets and other bodies? Asteroids are known to be rich in elements rare on earth such as platinum, iridium, and palladium, and it has been estimated that one large metallic asteroid could yield $50 million worth of platinum. Property rights of outer space will increasingly become features in business plans, and recently this aspect of Space Law has gained greater attention from legal firms and the American Bar Association. What rights do private companies have to outer space if they provide the primary, or even sole, means to reach it?

Police are already experimenting with robots, both armed and unarmed, and it’s only a matter of time before robots become standard in the surveillance, analysis, and enforcement of crimes. They are never tired, irritable, in need of a break, or biased, but neither are they able to take in the context of any given situation. Police know there is future for robotic law enforcement in traffic violations (for example, will a car’s onboard computer simply shut the vehicle down as soon as it starts speeding?), but how far will this extend? At what point is human instinct and judgment necessary in the enforcement of law or prevention of crimes? Is it most efficient to build a supposedly bias-free system of law that is responsible for determining, adjudicating, and punishing crime?

Thus far, the main purpose for developing brain-computer interfaces has been to allow amputees and those who suffer from paralysis to mentally control a mobile robot or robotic prosthesis. They have already made possible some remarkable feats, such as partial restoration of hearing in the deaf, direct brain control of a prosthesis, implanting false memories in a rat, and downloading a rat’s memory of how to press a lever to get food, and then uploading the memory after the original memory has been chemically destroyed. If this sounds like science fiction, consider that scientists have already moved beyond the interface technology and into nanoscale wiring implanted in synthetic tissue. A joint MIT, Harvard, and Boston Children’s Hospital research team led by Robert Langer, Charles Lieber, and Daniel Kohane developed a technique for growing synthetic biological tissue on a substrate containing biocompatible, nanoscale wires. This announcement came seven weeks after the announcement in London of the first-ever successful implantation of a synthetic organ, a fully functional trachea grown from the patient’s own stem cells, work led by the pioneering researcher Paolo Macchiarini. And if scientists can implant wiring, then, in principle, they can turn the body or any part of it into a computer. But while most people have no problem with prosthetic limbs, even those directly actuated by the brain, nor with pacemakers or cochlear implants, people may feel uncomfortable becoming part machine. At what point does the interface between body and machine dissolve? When bodies can be made part machine, is it necessary to redefine personhood? Will people all be assimilated?

More information on these issues is available at reilly.nd.edu/list14. Vote on the more compelling issues here.