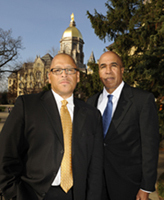 The survey was sponsored by the National Black Catholic Congress and Notre Dame’s Institute for Church Life and Office of the President.

Notre Dame social scientists Darren W. Davis and Donald B. Pope-Davis, who co-authored the report, set out to test the validity of anecdotal accounts that African American Catholics were becoming increasingly disengaged from their religion. Although the primary focus of the survey is on African American Catholics, the researchers utilized a significant comparative component with white Catholics, which resulted in several notable findings about both groups of Catholics.

The survey also is historic in that it represents the largest sample of African American Catholics ever surveyed on their faith.

Among the key findings of the survey are:

“This finding also shows up among African American Catholics who attend predominantly black parishes,” Davis said. “A greater sense of community that comes from worshipping with others who share cultural heritage heightens religious engagement.

“Thus, it is quite possible that understanding African American Catholicity may inform us about the religious challenges of white Catholics. Too often we approach questions of religiosity in a vacuum. Comparable studies of religiosity are critical.”

Two key survey findings of the quality of religious service and religious engagement were:

• On the often-used measure of Church attendance, 48.2 percent of African-Americans attend church at least once per week, compared to only 30.4 percent of white Catholics.

“This finding is interesting because we often hear anecdotal complaints about the Catholic Mass as quiescent, but most Catholics do not share this view,” Pope-Davis said. “But, relative to the components of Protestant church service, Catholics are not as satisfied.”

Despite their high level of religious engagement, African American Catholics are not completely satisfied with the scope of racial inclusiveness in the Church:

“Asking questions about abstract racism in the Church breaks down somewhat when asked about specific elements of the Church,” Davis points out. “This is not that unusual in survey research. But, it is clear that while there are still challenges for many African American Catholics in their parishes, the views of the institutional Church are more jaundiced or jaded.”

The survey also uncovered notable national demographic trends that are evident within religious denominations that have great consequences for the future Church.

“It is clear that moving forward, Church leaders should pay closer attention to the demographic shifts in society and understand that because of race, a multifaceted approach would probably work best,” Pope-Davis notes. “The forces that shape white Catholicity are different from the forces that shape African American Catholicity.”