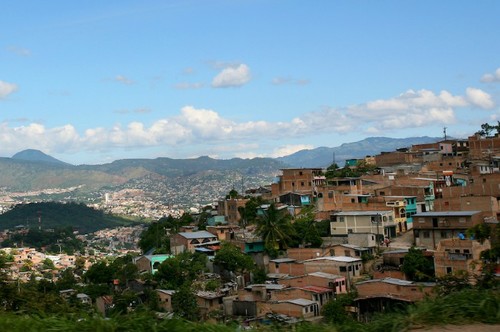 An article which details the creation of a new violence risk assessment tool in Honduras, co-authored by Notre Dame faculty and researchers in the Department of Psychology, the Kroc Institute for International Peace Studies, and the Notre Dame Initiative for Global Development (NDIGD), has been published in the Journal of Crime and Justice, the official, peer-reviewed journal of the Midwestern Criminal Justice Association.

The article was co-authored by Laura Miller-Graff, assistant professor of psychology and peace studies; Tom Hare, senior technical associate at NDIGD; and Juan Carlos Guzman, formerly a research and learning senior associate at NDIGD. The Kroc Institute and NDIGD are both housed within Notre Dame’s Keough School of Global Affairs.

Miller-Graff was invited to join the NDIGD initiative because of her research on violence and its effects on mental health and well-being, although Honduras represented a new research context for her. The project seeks to move beyond identifying communities or groups at risk of crime and violence to highlight individuals who are most at risk of becoming involved in violence as either victims or perpetrators. Miller-Graff hopes that the assessment tool and research will be available not only to academic researchers, but also to international development practitioners.

"There are many great resources to support strong evaluation of programs, but given that academic papers are rarely available free of charge, a lot of important information about measures and their psychometric quality is hard to access by organizations focused on evidence-based practice and policy. Our goal was to help bridge this gap," Miller-Graff said. "The measures we selected have been validated and used in a wide variety of contexts, so we anticipate that they could readily be used in other countries and cultural contexts as well."

The researchers initially included eight tools as subscales within the VIP-RA tool and worked with a number of local groups and researchers to determine how best to linguistically and culturally translate the subscales for a Honduran context. The researchers then interviewed over 1,200 young adults (ages 16-30) in Tegucigalpa over a one-month period to validate the tool.

After the survey period, the researchers removed questions from subscales that showed weak reliability or validity, reducing the original number of questions included in the VIP-RA tool from 156 to 89. Only one subscale was removed completely from the tool.

“By using previously validated tools, we wanted to see if we could identify the primary characteristics of those most at risk in high violence contexts like Honduras; a country that has been consistently ranked as one of the most violent countries in the world over the last decade," Hare said.

The revised version of the VIP-RA tool is able to measure several primary characteristics of at risk youth in high violence contexts, including emotion regulation, depression, post-traumatic stress, and resilience, among others. The researchers found that young adults involved in violence, either as victims of perpetrators, exhibited more signs of post-traumatic stress and depression. Additionally, the researchers found that young adults uninvolved in violence showed more signs of emotional regulation and factors associated with resilience.

“In addition to contributing to our knowledge about the characteristics of violence-involved youth in Honduras, this research and the VIP-RA tool can be used by other programs and organizations to focus their development interventions on the needs of those most at risk of becoming violence-involved,” Hare explained.

The article was written as part of NDIGD’s “Supporting USAID Impact Evaluation in Honduras” project. As part of this project, NDIGD is working with Dexis Consulting Group and the U.S. Agency for International Development’s (USAID) Honduras mission to evaluate development interventions in Honduras that seek to increase citizen security. The article was accepted for publication by the Journal of Crime and Justice in February 2018 and will be formally published in print later this year.