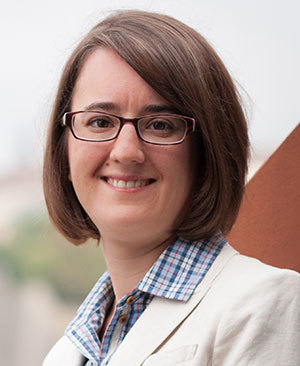 Therese Cory, an associate professor in Notre Dame’s Department of Philosophy, has been awarded a Philip L. Quinn Fellowship by the National Humanities Center, a private institute of advanced study in North Carolina.

Cory is one of 34 fellows chosen from among 630 applicants for the 2017–18 academic year. She is the fourth faculty member from Notre Dame’s College of Arts and Letters to receive an NHC fellowship since 2010.

“We are pleased to welcome this group of scholars as our 40th class of fellows,” said Robert Newman, president and director of the National Humanities Center. “This year’s pool of applicants was the largest in memory and included a remarkably wide range of excellent scholars and fascinating projects. The success of these applicants in an especially competitive year is a testament to the quality of work they are doing, and we are delighted to provide them support in the coming year.”

The fellowship — named for the late Philip L. Quinn, the John A. O’Brien Professor of Philosophy at Notre Dame — allows Cory to spend the year working on her book manuscript, Aquinas’s Metaphysics of Intellect: Being and Being-About.

While at the center, she will also have the opportunity to share ideas with other scholars in seminars, lectures, and conferences.

“I am tremendously excited to be able to focus full-time on finishing this manuscript,” Cory said. “The NHC program is set up to maximize time for research, while providing opportunities to interact with other fellows. I’m looking forward to the fascinating new ideas from other disciplines that these interactions will provoke.

“It also means a lot that the specific fellowship I received is named after one of our former colleagues in philosophy. Although I never met him, those who knew him speak of him with great respect and affection, and I’m honored to benefit from his legacy.”

Cory’s book project seeks to uncover a different model of the mind in the medieval philosopher Thomas Aquinas, which she feels has been eclipsed by later theories.

“What I eventually realized is that Aquinas doesn’t think of the mind as a mechanism that performs a function. Rather, it’s a potential we have for being transformed in certain ways that complete us as human beings.”

While science educators are familiar with the idea of modeling — using imaginative depictions to help students understand abstract relationships — philosophers of mind don’t always recognize the importance of modeling for their own projects, she said.

“When we try to understand the activities of our own mind, we unconsciously use imaginative models that shape our theorizing, picturing the mind as an ‘idea container’ or a ‘theater’ or an ‘inner eye’ looking out toward reality,” Cory said. “What I want to show is that there is a dramatically different way of modeling the mind — one that makes thinking less a kind of inner ‘looking’ and more like a kind of transformation of the human person.”

She uses Aquinas as the example of this kind of approach — which she calls the “metaphysical model” — but notes that the same approach is present in earlier Greek and Arabic thinkers as well.

Cory recently received a rising scholar award from the American Catholic Philosophical Association and a best article prize from the Journal of the History of Philosophy for her groundbreaking work on Aquinas and said this project stems from her research into Aquinas’ theories of self-knowledge and abstraction.

“What I eventually realized is that Aquinas doesn’t think of the mind as a mechanism that performs a function. Rather, it’s a potential we have for being transformed in certain ways that complete us as human beings,” she said. “I wanted to write this book to document and explain his approach, which I think is radically unfamiliar to contemporary scholars — and potentially very fruitful in helping us to think about our inner psychological lives in a new way.”