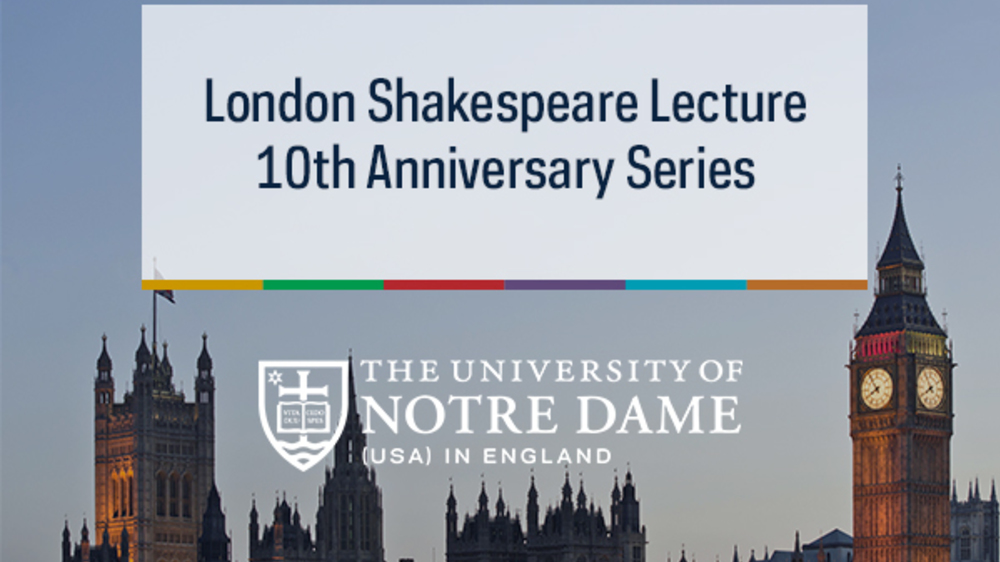 The Notre Dame London Global Gateway, along with partners from the United Kingdom and the University of Notre Dame campus, is launching a year-long exploration of Shakespeare. Professor Peter Holland will kick off this ThinkND series offering the 10th annual Notre Dame London Shakespeare Lecture in honor of Professor Sir Stanley Wells at 1 p.m. EDT April 7 on Zoom.

Since the annual lecture began in collaboration with the Shakespeare Birthplace Trust and the Shakespeare Institute, scholars, professionals and students have gathered to engage with a wide variety of topics. Speakers have included distinguished voices from different spheres of study and practice such as Dame Judi Dench, Gregory Doran, and Sir Nicholas Hytner. Wells, the event’s namesake and the U.K.'s leading Shakespeare scholar, offered the founding lecture on his life with Shakespeare.

Rev. Paul Edmondson, head of research at the Shakespeare Birthplace Trust, said, “We are thrilled to collaborate in this distinguished lecture series. Professor Sir Stanley Wells brings together everything that we might think of as constituting Shakespeare studies: textual scholarship, history, literary criticism and the theater. He continues to lead the world's appreciation of Shakespeare. Our speakers reflect the range and depth of Sir Stanley's important contributions, and we like paying tribute to him because we are thankful for all he has done and represents.”

In the April 7 event, Holland, the McMeel Family Chair in Shakespeare Studies and associate dean for the arts, will present “On the Shakespeare Trail,” exploring an often overlooked area of Shakespeare marketing — the film and theater trailer. Holland will explore how trailers conceptualize and lure audiences into watching on-screen and live versions of Shakespeare's plays.

“The Shakespeare Lecture has been an annual highlight for the past decade thanks to London faculty member Boika Sokolova, who has been an integral connection to the world of Shakespeare for our community,” said Josh Copeland, executive director of the London Global Gateway. “We are thrilled to have our esteemed colleague Peter Holland with us for the 10th anniversary lecture, and we look forward to exploring prescient themes in Shakespeare throughout this year-long celebration along with Shakespeare at Notre Dame, led by Mary Irene Ryan Family Executive Director Scott Jackson, as well as with our wonderful collaborators here in the U.K.”

To celebrate the 10th anniversary, this virtual series will welcome voices from around the world and explore themes related to Shakespeare and community. More events and dates will be announced.

This series is free and open to all, and it is hosted exclusively on ThinkND, Notre Dame’s open, online learning community brought to you by the Alumni Association. Campus partners for the Shakespeare series include Notre Dame International, College of Arts and Letters, Shakespeare at Notre Dame, DeBartolo Performing Arts Center, Nanovic Institute for European Studies and Notre Dame Alumni Association. For more information and to register, visit https://think.nd.edu/registration-london/.