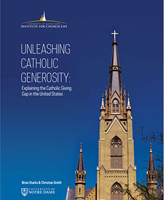 Catholics are less generous than other American Christians, according to a study recently published by the University of Notre Dame’s Catholic Social and Pastoral Research Initiative (CSPRI).

“Unleashing Catholic Generosity: Explaining the Catholic Giving Gap in the United States,” by Brian Starks, director of CSPRI, and Christian Smith, William R. Kenan Jr. Professor of Sociology at Notre Dame, compares the religious giving of Catholics with that of other religious communities in America and concludes that Catholics, on average, give less than other Christians.

“We hoped to look the problem square in the eye and ask, ‘What can we do about it?’ The suggestions that we make in the report are not Band-Aids but are focused on re-orienting parish culture, which is no easy task,” Starks says.

The report suggests that a principal reason for the “giving gap” between Catholics and other Christians is a lack of “spiritual engagement with money.” Without such engagement, many Catholics tend to “compartmentalize” by regarding their use of money and material possessions as separate from matters of faith and spiritual life. Exploring how “cultures of money” are affected by Catholic parish life, the authors argue that “discussions of money in Catholic parishes should not center on meeting basic organizational needs, but rather on spiritual growth and personal and world transformation. Parish culture should help Catholics reflect on the dangers of compartmentalizing their financial dealings from their life of faith.”

“The Catholic Church in the U.S. has so much potential to accomplish so much good in the Church and in the world, but is often hampered by lack of funds,” Smith says. “American Catholics learning to become much more financially generous would be truly revolutionary.”

“Unleashing Catholic Generosity” is the first of many anticipated reports from the CSPRI, which was established two years ago as a project of Notre Dame’s Institute for Church Life (ICL).

“It’s an excellent study,” says Theology Professor and ICL Director John C. Cavadini, “not only because it diagnoses a problem, but also, because of its skillful analysis of the data, it is able to propose some strategic solutions.

“This is social science at its academic best and at the same time truly in service to the Church.”