Young adults today enjoy more freedom, opportunities, and personal growth than any previous generation. But their transition to adulthood also is more complex, disjointed, and confusing than it was for their counterparts a generation ago.

In Lost in Transition (Oxford University Press, 2011), University of Notre Dame sociologist Christian Smith explores the difficulties today’s young people face, the underlying causes of those difficulties, and the consequences for both individuals and for society in general.

Written with three Department of Sociology graduate students—Kari Christoffersen, Hilary Davis, and Patricia Snell Herzog (now a postdoctoral fellow at Rice University)—the book draws on 230 in-depth interviews with a broad cross-section of emerging adults—ages 18 to 23. It identifies several aspects of American culture that contribute to the chaotic terrain that emerging adults must cross, including rampant consumerism, ongoing failures in education, hyper-individualism, and moral relativism. 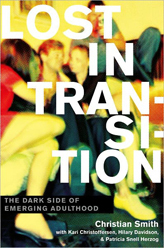 Older adults, Smith argues, must recognize that much of the responsibility for the pain and confusion young people face lies with them. Rejecting both alarmism on one hand and complacent disregard on the other, Smith suggests the need for what he calls "realistic concern” and reconsideration of our cultural priorities and practices that will help emerging adults more skillfully engage unique challenges they face.

He is the author of several books including Passing the Plate: Why American Christians Don’t Give Away More Money, Christian America? What Evangelicals Really Want, and Soul Searching: The Religious and Spiritual Lives of American Teenagers. His last book, What is a Person?: Rethinking Humanity, Social Life, and the Moral Good from the Person Up, won the 2010 Cheryl Frank Memorial Prize from the International Association for Critical Realism and an honorable mention in the philosophy category at the 2010 American Publishers Awards for Academic and Scholarly Excellence (PROSE).

Smith is director of both the Center for the Study of Religion and Society at Notre Dame and the Center for Social Research. He also leads the University’s Science of Generosity initiative. Established in 2009 with a $5 million grant from the John Templeton Foundation, Science of Generosity brings together the often disconnected and diverse approaches to this topic in order to research generosity in all its forms.