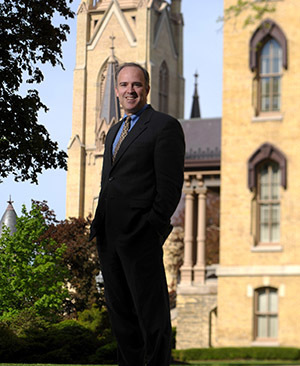 The University of Notre Dame’s Center for Civil and Human Rights and the Religious Freedom Project at the Berkley Center for Religion, Peace, and World Affairs at Georgetown University have been awarded a grant from the Templeton Religion Trust to study and report on the persecution of Christian communities around the world.

The $1.1 million grant will fund “Under Caesar’s Sword: How Christian Communities Respond to Repression,” a project that center director Daniel Philpott regards as both unprecedented and overdue.

“In recent years the persecution of Christians has grown more and more widespread,” said Philpott, a professor of political science and peace studies at Notre Dame. “The sad fate of Christians in Egypt, Syria and Iraq are only some of the latest episodes. Only in the last couple of weeks, the extremist Islamists who control Mosul, Iraq, have told the Christians remaining there to convert to Islam, live as second-class citizens, leave, or die. The denial of the religious freedom of Christians is one of the largest classes of human rights violations in the world today. Yet, the phenomenon is underreported in the mainstream media and the human rights community.”

Under Caesar’s Sword will commission a team of 15 prominent scholars to study some 100 beleaguered Christian communities in more than 30 countries including China, Indonesia, Nigeria, Syria, Egypt, Iraq, Pakistan, and India. The findings of their research will be developed and publicized in through a wide range of media including scholarly publications, a public report, online resources, a documentary film, and curricula for schools and churches. The research also will be the subject of a public presentation in Washington, D.C., as well as an international conference in Rome to be held in December 2015 on the 50th anniversary of the Second Vatican Council’s declaration on religious freedom, Dignitatis Humanae.

According to Philpott, the study is intended both to discover and draw attention to strategies adopted by Christian communities whose religious freedom is routinely violated.

“These strategies vary widely,” Philpott said, “ranging from nonviolent protest movements of the kind that Pope John Paul II led in Communist Poland, to the complex diplomacy of Christian churches in China, to simply fleeing from persecution en masse, as Christians have in Iraq. We want to learn why Christian communities adopt these strategies and which ones are successful.”

Philpott nevertheless insisted that Under Caesar’s Sword is more than an initiative of scholarship. “It is an effort to stand in solidarity with the persecuted Christians of the world,” he said. “To advocate for the religious freedom of Christians is not to claim that their human rights are more important than anyone else’s. Religious freedom is a fundamental human right to which everyone on the planet is entitled. Today, however, Christians constitute the lion’s share of those in the lion’s den.”

Originally published by Michael O. Garvey at news.nd.edu on August 26, 2014.