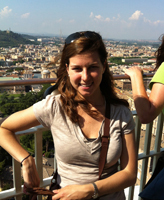 Finding and publishing long-forgotten musical compositions by classical composers is usually a project reserved for Ph.D. and master’s students. But don’t tell Samantha Osborn that.

Last summer the Notre Dame music and pre-med major spent two weeks in Rome at the Conservatory of Saint Cecilia, where she was able to locate and duplicate eight of Baroque composer Alessandro Scarlatti’s handwritten cantatas. She will perform one of them this spring as part of her senior thesis—an hour-long recital showcasing a variety of vocal techniques, time periods, and languages.

Osborn said she and her adviser, Department of Music Professor Georgine Resick, came up with the idea for the research trip during a discussion about potential material for the recital.

“I wanted to choose something by Scarlatti, but it was difficult to find something that fit my voice because he published so few of his works,” she says.

Thanks to an Undergraduate Research Opportunity Program (UROP) grant from the College of Arts and Letters’ Institute for Scholarship in the Liberal Arts and funding from the Nanovic Institute for European Studies, Osborn was able discover just the right piece of music.

From Handwritten to Digital

The cantata, the main form of vocal music of Italy during the Baroque period, is a musical composition that includes instrumental accompaniment and occasionally an orchestra. Scarlatti wrote more than 700 cantatas, but almost none of have been published in the United States.

Transferring the cantatas from their original manuscripts into a modern format involves copying the Italian lyrics and painstakingly inputting every musical note into composition software called Finale—which Osborn taught herself for this project.

While only one of the handwritten cantatas Osborn found in Rome is included in her senior recital, she plans to convert all eight pieces and publish them when the work is complete.

Initially, Osborn was not sure if it would be possible to take on a project of this magnitude as an undergraduate, but she says her experience proves that it is indeed achievable. “It would be cool if 10 years down the road my adviser used my project as an example to other students who may want to do a similar project,” she says.

Support from her advisers and the College of Arts and Letters was key, she adds. “I wouldn’t have been able to go if it wasn’t for UROP. It definitely took the weight of the financial aspect of the trip off my shoulders so I could focus on the research.”

From Archive to Stage

The trip presented its share of difficulties, Osborn says, including the inevitable language barrier, culture shock, and the unexpected difficulty of reading the composer’s handwriting.

“I had to be very resourceful, not only in planning beforehand and making sure everything would be there when I got there but in dealing with the things you can’t plan,” she says.

While in Rome, Osborn also had the opportunity to take voice lessons with Maestro Cesare Rufini, a well-known Italian opera singer and voice teacher who helped her prepare for the upcoming performance.

The chance to share a rediscovered Scarlatti composition with a modern American audience makes all of the effort worthwhile, Osborn says.

“It’s important that something he wrote isn’t just sitting in a library for hundreds of years. It was written to be performed.”

Osborn’s senior thesis recital is scheduled for 4 p.m., March 1, at the Annenberg Auditorium in Notre Dame’s Snite Museum of Art.