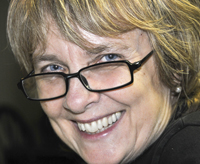 Art. Sacred music. Medieval history. And the digital humanities. Margot Fassler, Keough-Hesburgh Professor of Music History and Liturgy in Notre Dame’s Department of Theology, brings them all together in her current research on Hildegard of Bingen—research for which she has been recently awarded fellowships from both the American Council of Learned Societies (ACLS) and the John Simon Guggenheim Memorial Foundation.

Adding to these accolades, Fassler, who co-directs the Master of Sacred Music program in the College of Arts and Letters, today received the 2012 Otto Gründler Book Prize for The Virgin of Chartres: Making History Through Liturgy and the Arts (Yale University Press, 2010). 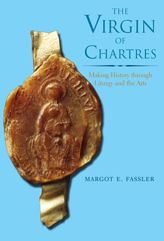 The annual Gründler prize recognizes an author whose work in any area of medieval studies is judged to be an outstanding contribution to the field. Fassler accepted the award before 3,000 of her peers at the International Congress on Medieval Studies at Western Michigan University.

Her winning book, about the history of the Cathedral of Notre Dame in Chartres, France, draws on local histories, letters, obituaries, chants, liturgical sources, and reports of miracles to explore the cult of the Virgin of Chartres and its development in the 11th and 12th centuries. The book explores how the past was made in the central Middle Ages and argues for an understanding of the liturgical framework of time.

“It was especially meaningful to win this prestigious award in 2012,” Fassler says, “because I am the third Notre Dame faculty member in a row to win, joining my colleagues John Van Engen and Thomas Noble—all three of us fellows of Notre Dame’s Medieval Institute.”

Noble, a professor in the Department of History, won in 2011 for his book Images, Iconoclasm, and the Carolingians, marking the first time the Gründler prize had ever been awarded twice to faculty from the same university, let alone in back-to-back years. Van Engen, the Andrew V. Tackes Professor of History, won in 2010 for Sisters and Brothers of the Common Life: The Devotio Moderna and the World of the Later Middle Ages.

In addition to the 2012 Gründler prize, Fassler’s The Virgin of Chartres received the biennial ACE/Mercers’ International Book Award in late 2011 for “an outstanding contribution to the dialogue between religious faith and the visual arts.”

Humanities in the Digital Age

Next up for Fassler are two research projects focusing on the medieval figure Hildegard of Bingen. The first, called Hildegard’s Scivias: Art, Music, and Drama in a Liturgical Commentary: Book and Digital Model, is supported by an ACLS Digital Innovation Fellowship—one of only eight given out each year.

“My project concerns a set of interlocking illuminations provided for a late-12th century copy of Hildegard’s theological treatise Scivias, written in the 1140s,” Fassler says. “I will be working with Christian Jara, a talented and experienced digital artist, to create a digitized model of the cosmos as Hildegard envisioned it, adding music and dramatic dimensions to the model, all of which are texts and musical compositions by Hildegard as well.”

The new project, Fassler says, will take advantage of Notre Dame’s “splendid” Digital Visualization Theater (DVT), a 50-foot dome that allows viewers to fully immerse themselves within and fly through high-resolution and high-fidelity images. “We hope to have this 12th century universe ready for display in the DVT when the Medieval Academy of America meets at Notre Dame in spring 2015,” she says.

Peter Holland, McMeel Family Chair in Shakespeare Studies in the Department of Film, Television, and Theatre and the associate dean for the arts in the College of Arts and Letters, says the use of new technologies in projects such as Fassler’s is transforming the work of humanities scholars.

“We have wonderful people doing brilliant work in the digital humanities here in the College—cutting-edge, innovative projects that take the way we can understand something in wholly new directions,” Holland says.

And the possibilities are endless, notes Susan Ohmer, director of DigitalND, a new initiative designed to streamline and strengthen digital work at Notre Dame. “Research such as Margot’s exemplifies the contributions that digital humanities can make to scholarship by opening up new methods of analysis and new bodies of research material for scholars to consider.”

In addition to the ACLS Digital Innovation Fellowship, Fassler was this year named a Guggenheim fellow, a midcareer award based on both “prior achievement and exceptional promise.”

The award will support Fassler’s new book about Hildegard’s early writings. The first interdisciplinary monograph on Scivias, it treats the work as a liturgical commentary, one that incorporates art, drama, and music in its explanations of the sacraments, she says.

“It is an exciting time to be finishing a study of Hildegard, as she will be named a Doctor of the Church in fall 2012,” Fassler adds.

Although deep into her Hildegard research, Fassler has certainly not forgotten about the subject of her last book, which she turned into a College Seminar course called Chartres Cathedral in the Middle Ages and Today: Art, Music, Liturgy, and Identity.

As part of this Arts and Letters undergraduate class, Fassler and Katie Bugyis, a teaching associate in the Medieval Institute, took 14 students to France during spring break to study the art, architecture, and theological importance of the cathedral, which houses the most complete array of in situ medieval glass and sculpture in Europe. The trip was supported by the College of Arts and Letters, the Nanovic Institute for European Studies, and Les Amis de la Cathédrale de Chartres.

“We are preparing a website on our trip and our studies in Chartres, so stay tuned,” Fassler says, adding with a note of pride that “the work of these students has been the best thing yet about 2012.”