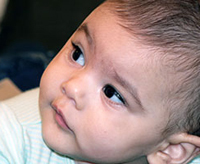 Social practices and cultural beliefs of modern life are preventing healthy brain and emotional development in children, according to an interdisciplinary body of research presented recently at a symposium at the University of Notre Dame.

“Life outcomes for American youth are worsening, especially in comparison to 50 years ago,” says Darcia Narvaez, Notre Dame professor of psychology who specializes in moral development in children and how early life experiences can influence brain development.

“Ill-advised practices and beliefs have become commonplace in our culture, such as the use of infant formula, the isolation of infants in their own rooms, or the belief that responding too quickly to a fussing baby will ‘spoil’ it,” Narvaez says.

“Breast-feeding infants, responsiveness to crying, almost constant touch, and having multiple adult caregivers are some of the nurturing ancestral parenting practices that are shown to positively impact the developing brain, which not only shapes personality, but also helps physical health and moral development,” says Narvaez.

Studies show that responding to a baby’s needs (not letting a baby “cry it out”) has been shown to influence the development of conscience; positive touch affects stress reactivity, impulse control and empathy; free play in nature influences social capacities and aggression; and a set of supportive caregivers (beyond the mother alone) predicts IQ and ego resilience as well as empathy.

The United States has been on a downward trajectory on all of these care characteristics, according to Narvaez. Instead of being held, infants spend much more time in carriers, car seats, and strollers than they did in the past. Only about 15 percent of mothers are breast-feeding at all by 12 months, extended families are broken up and free play allowed by parents has decreased dramatically since 1970.

Whether the corollary to these modern practices or the result of other forces, an epidemic of anxiety and depression among all age groups, including young children; rising rates of aggressive behavior and delinquency in young children; and decreasing empathy, the backbone of compassionate, moral behavior, among college students, are shown in research.

According to Narvaez, however, other relatives and teachers also can have a beneficial impact when a child feels safe in their presence. Also, early deficits can be made up later, she says.

“The right brain, which governs much of our self-regulation, creativity, and empathy, can grow throughout life. The right brain grows though full-body experience like rough-and-tumble play, dancing, or freelance artistic creation. So at any point, a parent can take up a creative activity with a child and they can grow together.”