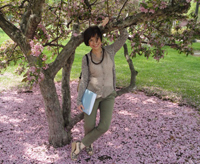 María Rosa Olivera-Williams, associate professor of Latin American literature at the University of Notre Dame, has been awarded a Fulbright Scholar grant to pursue her research at Universidad de Montevideo in Uruguay during the 2011-2012 academic year.

Olivera-Williams will spend her year abroad working on “The Rhythms of Modernization: Tango, Ruin, and Historical Memory in the Rio de la Plata Countries,” which explores how the popular phenomenon of tango became the embodiment of modernization and a strong national symbol of Argentina and Uruguay.

“My contribution to the impressive bibliography on tango is that I am studying it as a cultural ruin,” she says. “Since its origins, tango brought to the present of its displaced creators—Italian immigrants and rural migrants—images and sounds from the past, a past to which they could not return and did not want to return.

“The modernization in the lyrics, music, and dance of tango is seen in its vulnerability, paradoxically at a time when debates on Latin American modernity and nation building played out,” she adds.

A specialist in the literature of Argentina, Chile, and Uruguay, Olivera-Williams focuses her research and teaching on Latin American modern and contemporary representations of subjectivities and national identities; artistic projects from the South America’s “Southern Cone”; and issues of dictatorship, democratic transition, and traumatic memory.

As a professor of Spanish in the Department of Romance Languages and Literatures, she has won multiple teaching honors, including a 2010 Edmund P. Joyce, C.S.C. Award for Excellence in Undergraduate Teaching. Olivera-Williams also serves as director of the Helen Kellogg Institute for International Studies’ Latin American Studies Program and as a faculty fellow for both Kellogg and the Nanovic Institute for European Studies.

Olivera-Williams is one of approximately 1,100 U.S. faculty and professionals who will travel abroad through the Fulbright U.S. Scholar Program this academic year.

“It is wonderful because I will be able to complete my field research in Uruguay,” she says. “It is also wonderful because this award lets me know that the scholars who read and evaluated my project felt the importance of it and shared my passion.”

Fulbright is the U.S. government’s flagship international educational exchange program, designed to increase mutual understanding between the people of the United States and the people of other countries. Recipients of Fulbright grants are selected on the basis of academic or professional achievement, as well as demonstrated leadership potential in their fields. The program operates in more than 155 countries worldwide.

Since its establishment in 1946, the Fulbright Program has given approximately 300,000 students, scholars, teachers, artists, and scientists the opportunity to study, teach, conduct research, exchange ideas, and contribute to finding solutions to shared international concerns.

“Upon reading about the great personalities who were recognized in the past by the Fulbright Program, I feel very humble and proud,” Olivera-Williams says. “The names and works of the Fulbright alumni urge me to represent the Fulbright Program and the University of Notre Dame with my best work. I am truly thankful and delighted.”