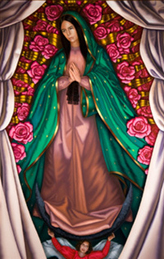 The Feast of Our Lady of Guadalupe fell on December 12, 2011 agreeably apposite to recent activities of Notre Dame’s scholars and administrators.

The feast celebrates the 16th century apparition of the pregnant, Nahuatl-speaking Virgin Mary and the vibrant image she left behind.

Her image, enshrined at the site of the apparition in what is now Mexico City, is venerated particularly in Latin America, but ubiquitously in the western hemisphere, including in the western apsidal chapel of Notre Dame’s Basilica of the Sacred Heart, where a rendition painted by Maria Tomasula, the Michael P. Grace Professor of Art, was installed three years ago.

The Hispanic and Latino Catholic bishops of the United States appealed to Our Lady of Guadalupe in a pastoral letter to the country’s undocumented immigrants issued last Friday, December 9, urging them to remember that she “constantly repeats to us the words she spoke to St. Juan Diego, ‘Am I, who am your mother, not here?’”

The bishops’ letter, which insists that American laws “should include a program for worker visas that respects the immigrants’ human rights, provides for their basic needs, and ensures that they enter our country and work in a safe and orderly manner,” cites and makes use of recent scholarship by Rev. Daniel G. Groody, C.S.C., associate professor of theology and director of the Center for Latino Spirituality and Culture at Notre Dame.

This strikes Rev. Joseph V. Corpora, C.S.C., who served as a pastor for 19 years in Catholic parishes in Arizona and Oregon, as good advice. “In both parishes there were many undocumented people, and I think that I dealt with the question of undocumented people in one way or another every day of those 19 years. They are truly the poor among us. They hope that the Church will speak for them and be their advocate, like Our Lady of Guadalupe was for Juan Diego and continues to be today.”

In frequent addresses to Catholic pastors, teachers, and school administrators nationwide, Father Corpora draws from his own extensive pastoral experience as he lists recommendations for increasing Latino enrollments. In addition to his noteworthy admonition to patronize Mexican restaurants and to “order tamales regularly,” these vary from learning Spanish, and including its use in liturgical celebrations to deeper engagement in Latino communities and the incorporation of Hispanic cultural events and feasts into school calendars. But invariably, Father Corpora advises that pastors “make a novena to Our Lady of Guadalupe. If we are successful in this effort, it will be due in large part to her guidance and intercession.”

Father Corpora believes that a successful outcome to the Catholic School Advantage Campaign would have numerous desirable outcomes for Latino children and families and for the nation’s academic and social future. A man whose conversation is composed in equal parts of affability and bluntness, he summarizes the campaign’s urgency: “Without Catholic schools, we will not have a Church. Without Latinos in our Catholic schools, we won’t have schools. So as the students say in the dorm (Dillon Hall) where I live, ‘Go figure.’ I’ve often thought that Latinos might even be God’s last-ditch effort to keep the American Catholic Church truly catholic, sacramental, and diverse.”

In that effort, his mother, however named—Notre Dame, Our Lady, Nuestra Senora de Guadalupe, Our Lady of Guadalupe—will continue to have a large part.