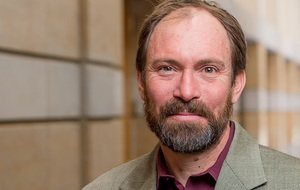 Edward “Ted” Beatty, professor of history, associate dean for academic affairs at the Keough School of Global Affairs, and faculty fellow at the Kellogg Institute for International Studies, has been selected as the winner of the 2016 Friedrich Katz Prize for his book Technology and the Search for Progress in Modern Mexico (University of California Press, 2015).

The Katz Prize is awarded annually by the American Historical Association (AHA) to honor the best book in Latin American and Caribbean history. The prize will be awarded during a ceremony at the association’s 131st annual meeting in Denver, Colorado, January 5–8, 2017.

Based on extensive archival research in Mexico and the Untied States, the book examines technological change in Mexico in the late 1900s, finding that new, imported technologies supported economic growth and brought cultural change and social dislocation but did not stimulate the expansion of domestic innovation and invention.

“This book is innovative, and brings fresh, new understandings of the role of technology in social change and economic development,” noted the prize committee. “At the same time, it returns readers to classical themes of Latin American historiography, of global and national inequalities, frustration with modernization, and uneven progress.

“[Beatty] demonstrates how industrial technology transfers to Mexico yielded basic changes in production without necessarily altering habits of innovation, learning, and adaptation. Along the way, Beatty provides us with a combination of rigorous analysis and narrative case studies, weaving micro and macro levels into one vitally important book.”

“I’m deeply honored to receive this prize,” Beatty said. “As with any project, this book is the product of many other people, including my teachers at New Mexico and Stanford and colleagues who gave generous and critical advice—including numbers of visiting and faculty fellows at Kellogg. I am also indebted to the Kellogg Institute for essential financial support.”

The Katz Prize honors Friedrich Katz, an Austrian-born specialist in Latin American history, whose nearly 50-year career inspired dozens of students and colleagues in the field.