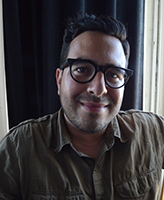 Growing up in Los Angeles, Mike Amezcua heard stories about how his great-grandparents emigrated from Michoacán, Mexico to find work in Chicago during the 1920s.

“They were setting roots in the city and had their first child,” explains Amezcua, a new faculty hire in Notre Dame’s Department of History and the Institute for Latino Studies. “But at the height of the Great Depression, they were swiftly deported as national anxieties about the economy turned Mexicans into scapegoats and pushed local agencies to send people back to Mexico, including American-born children.

“My grandmother, a U.S. citizen by birth, born in Chicago, lived her entire life in a small town in Michoacán never to return,” Amezcua says.

Such stories influenced Amezcua’s academic path, inspiring him to focus on how Mexicans helped shaped Chicago’s mid-20th century history. His journey will bring him to South Bend in fall 2014 as an assistant professor of history and faculty fellow in the College of Arts and Letters’ Institute for Latino Studies.

Amezcua, along with sociologist Jennifer Jones and theologian Peter Casarella, are among the first recruits in an aggressive faculty hiring program designed to bring to Notre Dame the best academics working in Latino studies, says José Limón, director of the Institute for Latino Studies and Julian Samora Endowed Professor of Latino Studies.

According to Limón, Latino Studies programs across the United States have tended to focus on Mexican populations in the Southwest and on Puerto Ricans in New York, with much less emphasis on the Midwestern experience.

“That makes Mike’s research refreshing, exciting,” he says, “and even more attractive that it is in our own backyard, particularly since Notre Dame has a special relationship with Chicago.”

Timothy Matovina, professor of theology and executive director of the institute, was equally enthusiastic.

“Professor Amezcua’s insights on the history of ethnic Mexicans in Chicago are making significant contributions not just to Latino history, but on how Latinos have shaped the history of Chicago and American cities more generally,” Matovina says.

“We were impressed all around by Mike and are looking forward to the enthusiasm he will bring to the University. He possesses the kind of bright, young mind we want to bring to Notre Dame.”

Amezcua says his research shows that the experiences of Chicago’s Mexican immigrants and Mexican Americans are unlike other classic stories of immigration and settlement.

“Mexicans changed Chicago, and Chicago changed them,” he says. “The period I look at—roughly the 1940s to the 1980s—is a period in which Chicago’s economic structure transitions from largely a manufacturing industry to a service-based economy. During this same time, it also becomes a magnet for increasing waves of Mexican immigration. Both of these changes were on a collision course with huge implications.

“The overall lesson to take away is that Mexicans stepped into shifting terrains, and their presence often complicated black/white notions of race relations,” he says.

That research also has resonance for the current debate surrounding immigration reform.

“Legislation like the Dream Act that argues for pathways to citizenship for deserving immigrant youth is not a not new way of talking about Mexican immigration,” Amezcua says. “During the Cold War in the 1950s, civil liberties organizations also used the image of the young immigrant as well as the immigrant family to put a face to unjust immigration laws.

“In Chicago, Mexican deportees became a battleground for civil liberties groups who sought to change what they saw as unjust immigration laws that only favored American industry—and willingly used images of school children in their campaign literature,” he says.

He is looking forward to teaching in the College of Arts and Letters, he says, engaging students in the process of historical inquiry and in exploring with them the role religion has played in shaping Latino urban life.

“Many topics in Latino History, whether they are about popular culture, consumerism, settlement, or identity still find their way to conversations about religion,” Amezcua says. “Since Latinos are still primarily Catholics—although I know many of them are increasingly joining other faiths—I welcome these conversations in the classroom with Notre Dame students who, through their other courses, are already well-versed in theology and current affairs in Catholic life.

“I am excited to know that whatever topic we cover in class, students will foster conversations about the role of religion in illuminating other aspects of everyday life.”